Isaac Newton (1800-1867) and James Wood Parkinson (1818-1895)
were mentioned in the article accompanying the above sketch in the book City Cries, 1850 [at end of post]:  "Indeed the city vaunts itself on producing the best ice cream in the world; and strangers generally give the preference to that which is sold at such establishments as Parkinson's, and Isaac Newton's." 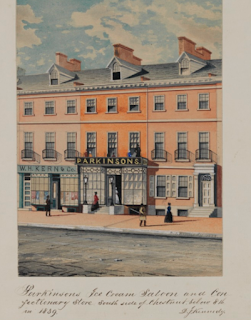 These Spacious and Magnificent Saloons are open during the day and evening for the reception of Visitors. --Coffee, Chocolate, Teas, Jellies, and a great variety of Cream and Water ices supplied at a moment's notice.

Always on HAND, a great variety of Bonbons, Christmas Toys, and Fancy Confectionary, selected at Paris expressly for the sales of this establishment.

N.B. ORDERS FROM ANY PART of THE UNITED STATES for Preserved Fruits in Sugar or Brandy, Sugar Almonds, French, Italian, and Martinique Liquors, Candy and Confectionary in general, attended to with promptness and punctuality."
A.E. Wright's Boston, New York, Philadelphia & Baltimore Commercial ... 1840 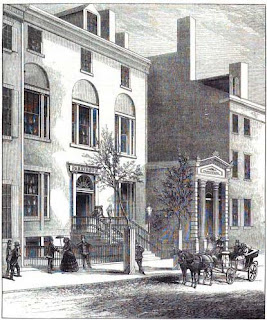 "Parkinson's Building, Chestnut Street, Above Tenth.— This ornament to our city, and praiseworthy place, was opened to our citizens last month. It is intended as an Ice-cream saloon, summer garden, confectionery, fruit store, and restaurant, and is likely to become one of the mast popular and fashionable resorts in our city. There are four saloons in all, two of which are 22 by 50 feet, and all furnished in the most magnificent style. The paper, the painting, and the carpets are elegant, tasteful, and in admirable keeping. The enterprise is one of the most laudable character, and adds a new and attractive feature to Chestnut Street.

The garden is embellished with a fountain, and many other appropriate ornaments. It is far superior to any of the celebrated establishments in New York. It must be popular; and already we hear that the worthy proprietor is reaping a rich harvest."
Godey's Magazine.  Phila: Dec. 1852 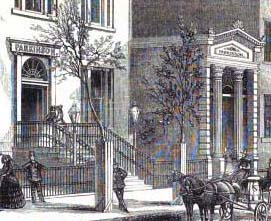 "In the accompanying engravings we give our numerous readers some most excellent views of the confectionary establishment of the celebrated Parkinson of Philadelphia. It is located on Chestnut street, above Tenth, and but a short distance above the Girard House. It is one of the best and most extensive cafes in the United States, and travellers inform us that in no European city can this establishment in all its appointments be excelled. The building was lately the mansion of a very wealthy private family; Mr. Parkinson has completely remodelled its interior, besides adding to the east wing is spacious and beautifully decorated store for the sale of ices, confectionaries, fruits, etc. [store is in building with two columns on right of picture above]

In the main building there are a number of apartments, all magnificently furnished, but the grand saloon for ladies is the chief feature of the first floor.  Its walls are richly frescoed by those eminent artists, Haberstrock & Kaiser, and furnished with sumptuous velvet carpets, rich, costly curtains, gorgeous mirrors, chandeliers, velvet sofas and chairs, marble and rosewood tables, and everything in perfect good taste and harmony. 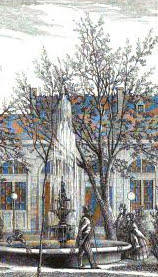 The garden attached, of which Mr. Devercaux has also given us a good picture, is filled with rare exotics, noble trees, shrubbery and flowers. A beautiful and classic fountain forms the centre, from which a jet d’eau is seen sparkling in the sunlight. The garden is delightfully inviting to the weary and furnished; and our Philadelphia friends need never want for a cool and refreshing resort in the hot summer evenings, so long as this convenient and most agreeable cafe is open to receive them.

In the rear of this parterre is a large building, fitted up expressly for gentlemen, as a reading and smoking room.  Here may be found on file some of the best literature of the day-all of the London illustrated journals, the Critic, Leader, and Punch, together with our own periodicals of note, embracing Gleason's Pictorial, Graham's Magazine, etc. Mr. J. W. Parkinson is entitled to the honor of having under his charge a restaurant which cannot be excelled in any country, and well worthy of that fair and beautiful city, Philadelphia."
Gleason's Pictorial Drawing-Room Companion.  Boston: May 28, 1853

Parkinson (-1856) was from Scotland, opened her confectionery and ice cream shop in 1818 next to her husband George's (-1842) tavern, wrote the book The Complete Confectioner, Pastry-Cook, and Baker in 1844, and had five children, including youngest son, restaurateur James Wood Parkinson (1818-1895).

Philadephia ice cream was made from the finest cream, sugar and flavors.  In her book Parkinson stressed the importance of using quality ingredients, and warned against "the rage" for cheaper substitutes - milk, "boiled flour, arrowroot, or potatoe flour," tartaric acid, tonquin bean or old cream.

"There is no article of the dessert kind that deserves a more elevated position than well-made ices, as well for their intrinsic merit as for the agreeable gout which they impart to a well-got-up entertainment.

Philadelphia has for a long time enjoyed a pre-eminent reputation in the manufacture of these delicious compounds; the rage however for cheap articles, without a due regard to their merits, has made sad inroads into the business; and, in order to accommodate this spirit of retrenchment, ignorant pretenders have consented to the base practice of making inferior articles, which they palm off on the unwary under the specious guise of economy. With these persons it is a custom to use three-fourths milk and only one-fourth of the legitimate article, cream, and, in order to procure a sufficient body, to intermix boiled flour, arrowroot, or potatoe flour; also to flavour with tartaric acid instead of fresh lemons, tonquin bean instead of vanilla, and inferior fruits when the best only should be used.

We mention these facts in order to caution young beginners against any such fatal mistakes. The best ingredients should always be used. Obtain your cream invariably fresh from a dairyman who is tenacious of his reputation, and who is known to produce a pure rich article; it cannot be too good, and if not used immediately should be kept in ice until wanted. Good cream cannot be had (even where large quantities are used) for a less price than twenty cents per quart. Use cream entirely, and on no account mingle the slightest quantity of milk, which detracts materially from the richness and smoothness of the ices. Always use the finest flavoured to be obtained, and follow implicitly the following very copious directions, and you will be certain to be rewarded by a flue article, of which you may well be proud…"

From the 1850 City Cries of Philadelphia book --

"ICE CREAM!
In the summer season, immense quantities of the finest ice cream are sold in Philadelphia.

Indeed the city vaunts itself on producing the best ice cream in the world; and strangers generally give the preference to that which is sold at such establishments as Parkinson's, and Isaac Newton's, over any which is to be found in our other great cities.

These gentlemen, however, although they contribute to the gratification of the public by their excellent confectionery, do not contribute to their amusement, by crying their good things in the streets. The countryman who figures in our engraving, however, sells an excellent article. It is real country ice cream, fresh from the farm, and although cried and sold in the streets, the market, and the public squares, it will please the most fastidious palate.
The loudest criers of ice cream, however, are the coloured gentlemen, who carry the tin cans containing it, about the streets on their shoulders. They sing a most laughable, but scarcely intelligible song in praise of their "Lemon Ice Cream, and Vanilla too!" concluding with a roulade which the Virginia Serenaders, or the original Negro Minstrels, might vainly attempt to imitate. All through the summer months these persevering pedestrians are heard singing their merry song in every part of the city. We have never tasted of the contents of their cans; but we are told by those persons who have been more fortunate in this respect, that although the African article will not bear a comparison with Parkinson's, it is by no means unpalatable; and considering the half price at which the coloured merchants accommodate their juvenile customers, it is a pretty good "fip's worth."