Taking the cook stove out of the kitchen for the summer ... then putting up the stove

If there was no out-kitchen (later called summer kitchen HERE) cooking stoves were moved out to the porch, lean-to shed, woodshed or someplace "fire-proof" to keep the kitchen cooler in the summer. Then comes the fall and the daunting task of "putting up stoves."


Some years ago, a historian wrote one sentence that cooking stoves were taken apart and removed for the summer, but did not give any examples or footnotes.  It seemed a lot of work, and messy... and so it was.  The following are some stories about the move.

The last story - by Mark Twain, so there may be some exaggeration for humor - describes putting a heating stove back up in the parlor, the same process would have been done with cookstoves that had been removed from the kitchen for the summer. Other stories include the "putting up" by the ladies of the house.

Several comments about moving the cookstove out of the house:

"I know about this time [late 1850s?] my father tired of changing this stove from the kitchen to the woodshed, in summer, and from the woodshed to the kitchen again in the fall.  What science does the average husband try harder to learn than that of putting up stoves? Each fall presents the same question, and each time he tackles the problem fearlessly, and it usually results in a stove man being called. The same pipe was used last year, when the stove stood just where you want it again this year; this pipe has shrunk and won’t fill the bill, though it was all put away together in the spring and hasn't been touched since until you try to put it together and make it reach. Then, too, after you have tried to put all the big ends of the pipe together, and then all the small ends together, you feel so mean, and yet somewhat relieved, to see how easily the pipe tits together, and stretches the required length in the skillful hands of a tinner."
[The Iron Age   Nov. 1, 1888]

"Besides it is often practicable to move the stove out of doors; and if the weather is very hot, it is easy to plan a dinner which will require only a minimum of heat. Then, too, what a satisfaction it is to be able to sleep at night without a thought as to the safety of the fire."
[Table Talk, Phila April 1891]

"In winter, the room is made comfortable by the heat of the cookstove ;—in the summer it [kitchen] is kept cool by the removal of said stove either to the woodshed or a small room intervening between workroom and woodshed; which apartment need not, necessarily, be large or expensively finished; as it is the stove-room only and is to be considered in that light alone. Its use is to relieve the work-room of the heat of the cook-stove through the summer, and if it be fire-proof, or rather safe as regards fire, that is about all that is requisite."
[The Country Gentleman  July 11, 1878]

"There is nothing a man dislikes to do more than putting up a stove. He always makes such a fuss, and puts on such an air of superiority and feels so injured that it makes a woman feel her physical inferiority most acutely.  Last summer when our men folks moved the stove out of the kitchen to the back porch, we resolved… that after this time we'd try and manage without their assistance…

We rolled up our sleeves, put on wide aprons, covered our hair, and went to work. The kitchen stovepipe had been put up in an honest, gentlemanly manner, fastened with wire and made safe every way.

We took it [stovepipe] down and cleaned it—not anywhere, like a man would have done it, but in an old boiler, that the soot and ashes could be carried to the garden and not tracked back again into the house, then lifted the oven off and cleaned it, took off all the plates, tacked down the zinc, and by good management, and lifting all together, we carried it into the kitchen and put it up nicely.

But our stock of patience became exhausted before the many joints of that dreadful stovepipe would fit together. One place troubled us more than language could express—it would just fit here, but not there; how we did wish for a man's brawny palms to grasp it and press it until the refractory places would go together! It was too bad! Just as we despaired…one of my gentle taps with the edge of the hatchet made it fit in, and the job was done…"
[Arthur's Illustrated Home Magazine  Jan. 1873]

The print "Just Moved" by Henry Mosler from 1873 is in the Library of Congress online collection.  A sketch by John Lewis Krimmel at Winterthur shows a panel stove set off to the side in a kitchen with stuff on the top...clearly not in use. 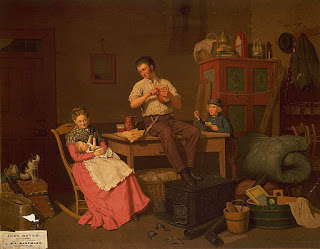 On to the story "Putting up Stove" by Mark Twain in Scientific American. New York: Jan 1, 1870.

"We do not remember the exact date of the invention of stoves, but it was some years ago. Since then mankind have been tormented once a year, by the difficulties that beset the task of putting them up, and getting the pipes fixed. With all our Yankee ingenuity no American has ever invented any method by which the labor of putting up stoves can be lessened. The job is as severe and vexatious as humanity can possibly endure, and gets more so every year.

Men always put their stoves up on a rainy day. Why, we know not; but we never heard of any exception to this rule. The first step to be taken is to put on a very old and ragged coat, under the impression that when he gets his mouth full of plaster it will keep the shirt bosom clean. Next, the operator gets his hand inside the place where the pipe ought to go, and blacks his fingers, and then he carefully makes a black mark down the side of his nose. It is impossible to make any headway, in doing this work, until this mark is made down the side of the nose. Having got his face properly marked, the victim is ready to begin the ceremony.

The head of the family--who is the big goose of the sacrifice--grasps one side of the bottom of the stove, and his wife and the hired girl take hold of the other side. In this way the load is started from the woodshed toward the parlor. Going through the door, the head of the family will carefully swing his side of the stove around and jam his thumb nail against the door post. This part of the ceremony is never omitted. Having got the family comfort in place, the next thing is to find the legs. Two of these are left inside the stove since the spring before. The other two must be hunted after, for twenty-five minutes. They are usually found under the coal. Then the head of the family holds up one side of the stove while his wife puts two of the legs in place, and next he holds up the other while the other two are fixed, and one of the first two falls out. By the time the stove is on its legs he gets reckless, and takes off his old coat, regardless of his linen.


Then he goes for the pipe and gets two cinders in his eye. It don't make any difference how well the pipe was put up last year it will always be found a little too short or a little too long. The head of the family jams his hat over his eyes and taking a pipe under each arm goes to the tin shop to have it fixed. When he gets back, he steps upon one of the best parlor chairs to see if the pipe fits, and his wife makes him get down for fear he will scratch the varnish off from the chairs with the nails in his boot heel. In getting down he will surely step on the cat, and may thank his stars that it is not the baby. Then he gets an old chair and climbs up to the chimney again, to find that in cutting the pipe off, the end has been left too big for the hole in the chimney. So he goes to the woodshed and splits one side of the end of the pipe with an old axe, and squeezes it in his hands to make it smaller.


Finally he gets the pipe in shape, and finds the stove does not stand true. Then himself and wife and the hired girl move the stove to the left, and the legs fall out again. Next it is to move to the right. More difficulty now with the legs. Move to the front a little. Elbow not even with the hole in the chimney, and the head of the family goes again to the woodshed after some little blocks. While putting the blocks under the legs, the pipe comes out of the chimney. That remedied, the elbow keeps tipping over, to the great alarm of the wife. Head of the family gets the dinner table out, puts the old chair on it, gets his wife to hold the chair, and balances himself on it to drive some nails into the ceiling. Drops the hammer on wife's head. At last he gets the nails driven, takes a wire swing to hold the pipe, hammers a little here, pulls a little there, takes a long breath, and announces the ceremony concluded.


Job never put up any stoves. It would have ruined his reputation if he had. The above programme, with unimportant variations, will be carried out in many respectable families during the next six weeks."