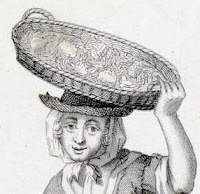 "Crab Crab any Crab" in the flat basket from 1688 Cryes of the city of London .  A second street seller with a wheel-barrel "Crabs! Crabs Alive!" in 1850 City Cries of Philadelphia (where a crab has caught a boy).  How a monkey catches crabs, crabs from Norway, and British crab-pots... 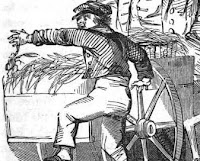 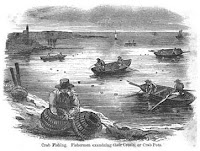 Crabs are taken in various modes—some very simple, and others on a large and more complex scale, for purposes of commerce. The West Indian monkey inserts his tail in the hole of the Crab, and the latter grasping it, the former jerks out his tail, and so secures his prize. The children of fishermen often catch Crabs, by thrusting into their retreats a stick, with a hook on the end of it, which the animal instantly seizing, is drawn forth. This, however, and the like methods, can take but few, and those not the finest in quality.

Crab fishing, as generally conducted along the British coast, is pursued by two men going out in one boat. Besides their boat, they require a capital of about ten pounds; one half for creels, cruives, or crab pots, the other half for lines. These Crab-pots are made of dry osier, and resemble basket-work. They are framed on the principle of the wire mouse-trap the aperture being at the top, instead of the side. Within the pot the bait, consisting of thornback, or skait, is fixed at the bottom, and the pot is then dropped in some favorable location, three stones being fastened inside of weight enough to sink it. Sometimes the pots are sunk twenty fathoms deep, under certain conditions of weather and ground. In fine weather, they are dropped in from three to five fathoms, but Crabs are found chiefly where the bottom is rocky.

A line is fastened to the pot, and at the upper end of the line is fixed a cork, which floats on the surface. Thus the place is known where the pot is sunk, and usually from forty to fifty pots are set at the same time. The bait being suspended about the middle of the pot, can readily be seen by the Crabs, which, entering the aperture, find, like a mouse in a wire-trap, that escape is impossible. Lobsters, Prawns, and Shrimps are often found captured with the Crabs.

After setting all their pots, the fishermen have still some time left to go further seaward for other fish, before it is necessary to visit them. Crab fishing, therefore, while a valuable addition to their means-of gaining a subsistence, does not preclude their pursuit of other fish at the same season. 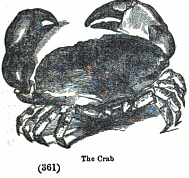 Crabs are brought to market both raw and boiled. If the market be distant, they are placed in a well box, attached to the outside of the fishing vessel and thus are brought to Billingsgate even from far off  Norway. May, June and July are the months in which it is generally out of season, though, even then Crabs may be procured, which are perfectly fit for the table. … The usual length of boiling is from one fourth of an hour to two hours, either in sea water, or water saturated with salt.
Frost, John.  Grand Illustrated Encyclopedia of Animated Nature… New York: 1856


The cryes of the city of London drawne after the life in 74 copper plates  [London: 1688?] from The British Museum. 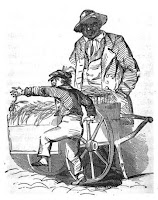 Our supply of crabs comes mostly from the Chesapeake Bay. In the summer months they ascend the Patapsco as high as Baltimore; but those seen in our markets are generally taken some fifteen or twenty miles below that city. Hampton, a village near Old Point Comfort, Virginia, is the most famous place for crabs. It has often been tauntingly said the people subsist on them, and even that some of the inhabitants have fins. They have been jeered so much on account of their fishy location, that strangers landing at the wharf, have found it prudent to say as little as possible on the subject of crabs.

The hard-shelled crabs are most common, and they are sold very cheap. The soft-shelled ones, which are so abundant in Baltimore and the other southern cities, are very rarely offered in our [Phila] market, although the keepers of the best hotels and eating-houses take care to obtain from Baltimore a supply for their tables, when they are in season.

Here is the old Crab-man, with his wheelbarrow, calling out with might and main, "Crabs! Crabs alive! Buy any Crabs? Here dey are, all alive! Werry nice and fresh!"

But see! there is a young gentleman who has caught a crab, by just putting his hand among the live contents of Cudjoe's wheelbarrow; or rather, to speak more accurately, the crab has caught him. See how he "jumps about, and wheels about, and cries Oh! Oh!" ...
City Cries [of Philadelphia]… designs by Croome.  Phila: 1850