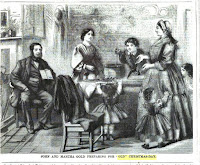 "Old Christmas" was January 6th and new was December 25 in the following story. The father kept Christmas on the old date when the mother Martha Gold served her locally famous pudding - recipe below.  From an 1866 British magazine.

Christmas is Christmas; I suppose nobody will gainsay that. December twenty-five, or January six, it is still Christmas. Twelve good clear days.

"Which is Christmas-day?” "Christmas-day," most people would reply, "why, December twenty-five, of course!" Father did not say so—would not say so— always would declare that Christmas-day was January six, and he kept it on that day … in the Old style, Christmas-day falls on the sixth of January, our Twelfth-day….  "Forget and forgive," worked out in holly berries, shone on the walls of our best room…

Now these are the proportions, mind you, and you can make less or more, your pudding being little or large, just as you like.

Flour, 3 pounds; beef suet, 2 pounds, chopped very fine, 21/2 pounds of stoned raisins, and 2 1/2 of currants, well washed; a dozen eggs and a "wee drap" of milk; about 6 ounces of candied peel; a good sized nutmeg well grated, and a teaspoonful of cinnamon. Then, most indispensable! a little salt, just a saltspoonful and a half, to flavour it. You, if you | have not tried it, have no idea how a little salt improves a pudding. The pudding should be boiled at least ten hours.

How bright and cheerful our kitchen looked always, but especially on pudding night. Everything as clean and bright as a new pin; all the plates upon the dresser shelves sparkling in the fire light, and looking as if they winked at the prospect of brown gravy and hot pudding; the kitchen table was covered with good things, and the children were dancing about it in the very best of spirits. There were the plums and currants, and peel and suet, and flour and eggs, and spice, and the chopping-board as white as the suet, and the pudding pan ready for mixing; there was the kettle singing on the hob, and there was father by the fireside, making believe to read, but with his eyes always wandering from his book to look at us, with such a merry twinkle in those eyes of his, that it was an invitation not to be resisted, to leave the pudding stirring for a minute, and bound across the room and kiss him. Mother, of course, took the lead in the pudding making, but I, her eldest daughter, was duly instructed in the art and mystery. We all had a good stir at the pudding, from brother John down to the very littlest. It was capital fun, every one of us in good humour, singing like the kettle, sparkling like the fire.