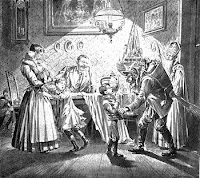 In Germany and Pennsylvania Dutch areas, Belsnickel or Pelznichel appeared on Dec.6 - the Saint's day of Saint Nicholas. He carried a rod and wore a scary disguise, with jingling bells and clanging chains... not a jolly Santa Claus.


From William Howitt's  The Rural and Domestic Life of Germany.  London: 1842 --

According to ancient custom, about a fortnight before Christmas, Pelznichel or Knecht Rupert, has made his visit to the children. This person represents no other than St. Nicholas, as we learn from an old poem. ST. NIKLAS.

Pelznichel is a man disguised in a fur cap, and otherwise made awful to children by his singular habiliments, being armed with a rod, having a capacious bag or pouch hanging before him, and a large chain thrown round him, whose end being dropped on the ground as he walks, makes to their imaginations a mysterious noise. Sometimes he has a number of little bells hung about him, and thence is called by Richter, in his Fixlein, "Knecht Ruprecht, with his jingling bells." His name of Knecht Ruprecht is most likely derived from the idea that he is the servant of the Christchild, who sends him to prepare for his own arrival on Christmas eve. He is, in fact, some servant or dependent of the family, who engage him to undertake this office, and furnish him with requisite information.

The children above eight or nine years old are let into the secret, which they faithfully keep. The younger children, as the time draws on, are often reminded that Christmas is coming, and that Pelznichel will be here, and, according as they are good or bad, will correct or reward them. If they have been bad children, he will use his rod; if good, he will bring them nuts, and apples, and cakes, from the good Christ-child. All this they receive as gospel, and with the greatest awe, and it has a strong effect upon them. They have a notion that Pelznichel, or the Christ-child, has his eyes upon them when they are not aware. That Pelznichel is going round the house at night and listening, and if they are naughty are sure to hear them; or that the Christ-child with an ubiquitous knowledge sees all, and tells Pelznichel all about them. They look forward, therefore, with great awe and some anxiety to the appearance of Pelznichel. At length, some days before St. Nicholas' day, the father or mother says, "Well, children, now be very good, for Pelznichel is coming. He has sent word that he will be here on such an evening at six o'clock."

On that evening, all is expectation, and scarcely is tea away, when there comes a ring at the door. All exelaim, “That must be Pelznichel !” The faces of the children are filled with awful expectation. All stand silent. Presently is heard a distant and mysterious ringing of bells; a jingling of chains on the stone stairs. It becomes more distinct,—it approaches; there is a heavy accompanying tread. There is a bustle in the passage, as if some matter of great moment was occurring. Voices are heard speaking, and amongst them, one deep and strange one. That is Pelznichel. The heavy tread, the ringing bells, the clanking chains, the bustle, and the voices are at the door; every eye is fixed on it. All are rooted in silent awe. The door opens, and in stalks the strange figure of Pelznichel—the Mumbo Jumbo of Germany, while behind him are seen all the assembled servants of the household, full of curiosity, to witness what he will say and do. He announces that he is sent by the good Christ-child to reward good children, and correct the bad. Every little heart beats with hope or fear. He addresses them by turns, beginning with the eldest. He asks them how they have pursued their studies; perhaps calls for their books; pronounces an opinion on their progress, and by what he says, gives them intimations that he is aware of their general conduct, and of particular acts, good or evil, which fills them with surprise. If they have quarreled on their way to school; if they have been ungenerous or revengeful, they are sure to be told of it. He turns to each child in rotation, and adapts his rewards to the age and character of each. The very little ones often propitiate him by addressing him in a little rhyme the moment his eyes are turned upon them, and which the nurse has taught them for the purpose.

Which is literally, “ Christ-child come; make me good, that I may come to thee in heaven.” The aspect of a little child standing in awe and in faith before Pelznichel, and in the soft innocent tones of its voice making this simple petition in the truth of its heart, as I have seen it, is one of the most beautiful and affecting things in the world.
Pelznichel talks sternly, and with menacing agitations of his rod, to those who have been stubborn, lazy, or disobedient, and commends those who have been otherwise. He hands the rod to the father, and commands him to use it when necessary, or he vows to come and use it himself. He seldom, however, proceeds on this occasion to any actual chastisement, as it is intended rather as a means of reformation, by instilling a salutary fear; and he adds that, on Christmas-eve, Christ-kindschen will come; and according as they behave, in the mean time, will reward them for good or ill. If for good, they will find many nice things on and under the Christmas-tree; if on the contrary, he will himself probably be ordered to fetch them, and carry them into the woods in the mountains, and there to shut them up in a cave in the rocks, in the cold and darkness, where snakes hiss, owls hoot, toads and salamanders crawl, and fire runs about the ground. He generally ends by dealing out, from his bag, nuts, apples, and little cakes, to each of them,—and throwing others on the floor; while they are busy in scrambling for them, he disappears.

In the country, Pelznichel goes about on a donkey,-and actually often chastises the children of the peasantry. His visit in town or country has mostly a decisive effect. The parents remind the children of what he has said. They congratulate them on the commendations they have received; they remark on the faults he has related of them; and the fact that they are seen and observed often when they little think of it. They encourage them to begin seriously to correct and improve themselves, and to secure from Christ-kindschen a certain token of approbation of their conduct. The ensuing fortnight is a season of self-watchfulness and probation.

Image actually is Krampus from an Austrian newspaper, 1896. But he is carrying a switch.