A poem about gathering pumpkins heaped "high in the old red cart" hauled by oxen then made into a pie appeared in the November 23, 1889 edition of Good Housekeeping.

I can see the pumpkins that shone that morn
Like a pile of ruddy gold,
And hear grandsire say, " We must get them in,
For the nights are growing cold."

So we heaped them high in the old red cart,
Harry and Teddy and I,
And the lumbering oxen dragged them home,
To be made into pumpkin pie. 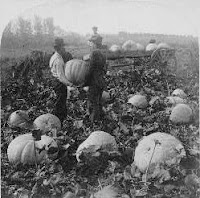 Ah, those old-time, " Jack o' the Lantern " days
Have faded away like a dream,
And the art of making pies is lost
In these days of hurry and steam.

Would you know how grandmother made her pies
In that wonderful olden time?
Then listen, for here is the recipe
That I've just turned into rhyme:

Take a sharp knife - the best of its kind—
And pare off the pumpkin's golden rind;

Then cut into cube-shaped blocks of buff,
And slowly simmer till soft enough.

Run through a sieve—the best to be bought—
Till you have of the sifted pumpkin a quart.

Oh the "cropple-crown " hen will mourn to-day
For her rifled nest in the scented hay,

For ere your pumpkin pies you can bake,
Out of her nest you must nine eggs take.

Beat yolks and whites in a separate dish
Till both are foamy and light as you wish.

White sugar, one cup and a half you take,
And two quarts of milk, your pies to make;

Then of cinnamon, nutmeg and mace, each one;
You take a teaspoonful ere you are done.

Next spices, sugar, eggs, pumpkin and milk,
You must beat together till "smooth as silk "—

(That is the curious, homely phrase
My grandmother used in those old-time days.)

Now a dozen of raisins, more or less,
To each pie will add flavor, you must confess.

The whole must be baked in a shell-like crust,
And just as it hardens, with sugar you dust.

If you follow this rule, when done, you'll cry,
"Here's a genuine, old-time pumpkin pie!"