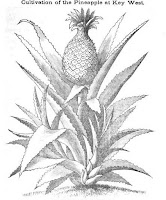 Elizabeth Ellicott Lea's recipe for Pine Apple Syrup was "to season ice cream."  Mary Randolph's Virginia Housewife included a pineapple ice cream recipe as did the British author Nutt in 1819. The 1749 article on ananas (pineapple; below) may have been read by George Washington or Charles Carroll, Barrister, of Baltimore who each had a pinery to grow the expensive plant before 1800. Incredible picture of selling some of the "35,000 pines" that arrived at London in 1847 on one ship.

Pine apples just off the ship, for sale in 1847 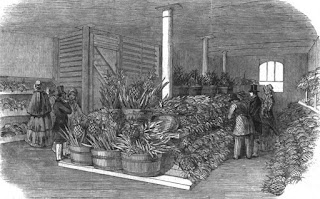 Pine-apple Syrup for ice cream
Pine Apple Syrup.
Pare the pine apples, cut them in pieces, and to three pounds of pine apple put a quart of water; cover it and let it boil till very soft, when mash and strain it; to a pint of this juice put a pound of sugar, boil it till it is a rich syrup, and keep it corked up in bottles to season ice cream.  [Lea, 1851]

PINE-APPLE SYRUP.
Drain the syrup from your pine-apple chips, when you are going to dry them that are preserved, as you will see in your receipt of pine-apple chips; boil the syrup three or four times, and put it into your bottles while warm; cork and bladder them the next day.  [Nutt, 1819 - this was among a group of 6 syrups, and didn't specify ice cream topping;  but this flavor syrup is delicious on vanilla ice cream]

Pine-apple ice creams
Citron Cream.
"Cut the finest citron melons when perfectly ripe - take out the seeds, and slice the nicest part into a China bowl in small pieces, that will lie conveniently; cover them with powdered sugar, and let them stand several hours—then drain off the syrup they have made, and add as much cream as it will give a strong flavour to, and freeze it. Pine apples may be used in the same way." [Randolph, 1824]

PINE-APPLE ICE CREAM.
Take one gill and a half of pine-apple syrup, put it into a bason, and squeeze in one lemon and a half; add one pint of cream, make it palatable; then put it in your freezing pot, and freeze it till it is as thick as butter; if you would have it in the shape of a pine, take the shape and fill it; then lay half a sheet of brown paper over the mould before you put it into the ice, and let it remain some time, and be careful no water gets into the shape.  [Nutt, 1819]

PINE APPLE WATER ICE.
Take two gills of pine-apple syrup, squeeze two lemons in, add a pint of water; it must be rich and freeze thick; if you want to have it in the shape of a pine, close it well, and cover your shape with a sheet of paper before you put it in the ice; let it lie for one hour covered with the ice and salt before you turn it.   [Nutt, 1819]

The cheap West India pine-apple trade dates from 1844, when pines were first cried in the streets “a penny a slice."  [Hints for the Table. 1859]


LARGE IMPORTATION OF WEST INDIA PINE APPLES. Illustrated London News.  July 17, 1847
A cargoo of this hitherto valuable and delicious fruit, consisting of the immense quantity of 35,000 Pines, has, within these few days, been received by the Trinity yacht, Captain Hounsell, in twenty-five days from New Providence, consigned to Messrs. Keeling and Hunt, Monument-yard; this being the largest quantity of Pines ever brought, at one time, to this country.

A portion of the fruit was brought on the deck of the vessel, growing in the soil in which it was originally planted; and, as exhibited in the different floors at the warehouses of Messrs. Keeling and Hunt, gave them the appearance of huge pineries. This firm received, previous to the above cargo, upwards of 30,000 Pines, by steamers and sailing vessels; the whole of which went rapidly into consumption; and the annual supplies are now looked forward to anxiously by the public, who apply the fruit to preserving purposes, as well as dessert.

The bulk of this fruit is brought from the Bahamas, where the Americans, to the period of the first importations to England, enjoyed the exclusive purchase of the fruit from the natives; but, since the English have been in the market, the Pines have advanced 50 to 60 per cent. in value. The Pine plants in the West Indies only bear for three years; and those of the last of the three years' growth are sent on the trees to England, and thereby make room for other plantations.

As Pine-apples are becoming economical luxuries, it may be useful to state that they may be kept a considerable time by twisting off their crowns; which are often suffered to remain and live upon the fruit, till they have sucked out nearly all the goodness.


“In preparing to serve a Pine-apple, at table, first remove the crown, by placing round it a napkin, and twisting it out; then cut the fruit horizontally into slices; and, these being served, the scales and rind are pared off by the guests.”  [Illustrated, 1847]

A Description of the Ananas or West-India Pine-apple.  The Universal Magazine. London: 1749
Hints for the Table; 1859
Illustrated London News.  July 17, 1847