A little dog - the turnspit dog - ran inside the wheel high on the wall which turned the spit in front of the fire.  The turn-spit was mentioned in a 1601 inventory (dog-wheell). Several early quotes from 17th through 19th century writings.

“Newcastle is a pleasant village : at a decent inn here, a dog is employed as turns it; great care is taken that this animal does not observe the cook approach the larder ; if he does, he immediately hides himself for the remainder of the day, and the guest must be contented with more humble fare than intended,” Wigstead’s Remarks on a Tour to North and South Wales in the year 1707. 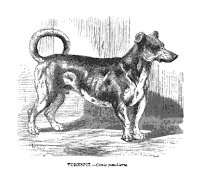 "There is no turnespit dog bound to his wheele more servily then you shal be to her wheele; for as that dogge can never climbe the toppe of his wheele, but when the toppe comes under him, &c"  Eastward Hoe, as it was playd in the Blackfriers, 1605.

"The reader will probably be surprised…one of these turnspits still exists, [1854] and daily performs its service as of old, for in the kitchen of this inn [Hanbury Arms in Caerleon] still exists the original wheel set up ages ago, and the culinary operation of roasting is always performed through its instrumentality, it being worked by the dog in question. The animal is curiously cunning, and at the same time fond of its work, for, when placed in the wheel for the purpose of shewing its operation, it can scarcely be made to move it more than a turn or two, and shows the greatest anxiety to get out; but, as soon as a joint of meat is put down to the fire, the dog works with the greatest alacrity, never stopping till the meat is cooked.”  The Works of William Shakespeare…v.3  by James O. Halliwell.  1854