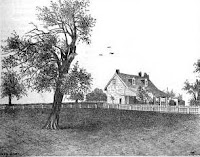 The Seckel pear, the "finest pear," had a celebrated ‘original tree’ on Seckel’s farm, later part of the Stephen Girard estate, south of Philly.  The tree was said to have been found in the 1760s, survived for decades and was even pictured in magazines.


Bishop White related that when he was a boy, about 1760,  'Dutch Jacob,' a “sportsman and cattle dealer” would give the pear to folks but not say where he obtained it.  He bought the land near the Delaware River, and it was sold to ‘Mr. Seckel’ who publicized the pear.

A sample of the fruit was sent to the London Horticultural Society in 1819.   In an 1817 book on fruit trees, Coxe described the pear as “the finest pear of this or any other country  and attributed its origin to Mr. Seckle of Philadelphia. [Coxe, 1817]  The early spelling was “Seckle, in preference to Seckel.”  [Maund, 1824]

"Its affinity to the Rousselet, a well known German pear, leads to the supposition that the seeds of the latter pear having been brought here by some of the Germans settling near Philadelphia, by chance produced this superiour seedling."[Downing 1845]

Georg Lorentz [Lawrence] Seckel (1746-1823) was born in Phila to a German immigrant Jurg [George] David Seckel a butcher in the city (his pasture was on north Market St).  In the early 1770s Jurg -perhaps the Dutch (German) Jacob? - lived in the city, bought lots in Moyamensing,
a town south of Phila, and in 1777 his son bought a lot in the next town, Passyunk (the "Neck").

George [Lawrence] Seckel, listed as merchant, was civically active, and as a member of the Penn. Assembly he and other representatives ate at President Washington’s Philadelphia home when it was the Capital.  “The Seckel pear was cultivated first by Lawrence Seckel, and the original tree stands on the place in the Neck, once his [died 1823], and afterwards Stephen Girard's [died 1831]…  The tree had been upon the place, from the time of the father before him...brought them to the city, and gave them out to a few of his friends. He told the father of C. J. Wistar, (my informant,) when he gave him some of the pears, that he knew not how the tree came there. It might be a question, whether it might not have been a Dutch or Swedish plantation of early days.”  [Watson, 1857]

“…the richest and most exquisitely flavoured of fruits being borne on the healthiest and hardiest of trees, is the Seckel Pear, so general a favourite that no garden is considered complete without it.” Most varieties of pear increase in flavor after they are picked if kept at a warm 60 to 70 degree temperature. [Once, 1864]

Baltimore as the source story - a man in Baltimore named Sichel gave a planting to someone in the Harmony Society at Harmony, Ind. between 1814 and 1824 when they left (taking the tree) for Economy, PA.  [Meehan’s, 1891]

RECIPE by Miss Shute published in Philadelphia in 1878:

SWEET PICKLED PEARS.
To seven and a half pounds fruit, take three and a half pounds sugar, one and a half pints of vinegar, one ounce of cloves, and one ounce of cinnamon. If the pears are hard, boil till nearly done in water, and then put into the boiling syrup to cook till done; but if they are Seckel, or any ripe pear, boil in the syrup till a silver fork penetrates them easily; take them out and boil the syrup half an hour, or less if it gets too thick; pour over the pears while hot. Seal up when cold.

Stephen Girard (1750 France-1831) was the wealthiest man in America when he died, leaving his fortune to charities and the city of Philadelphia. His country home “Gentilhommiere” with over 500 acres south of the city in Passyunk contained the old Sickel Pear tree.

Col. Timothy Matlack (1736-1829) from Philadelphia knew Jurg "David Seckell." Matlack went at least once to his slaughterhouse in 1777 with diarist Jacob Hiltzheimer.  He is now known for writing the finished formal copy of the Declaration of Independence, in the Nt. Archives.
"During the period of Ebenezer Seaver's service in Congress, [represented Mass. 1803-1813] Colonel Matlock, a gentleman whom he met there, gave him some scions from the original Seckel pear-tree, near Philadelphia." [Memorial, 1881]

“Judge Ruggles [Benjamin 1783-1857] was a philanthropist [in Ohio] deeply interested in the cultivation of fruit. He furnished scions from his young orchard freely to all that asked for them. In 1815-20 while serving his state in the senate of the United States he brought scions obtained from the original Seckel pear tree near Philadelphia, and introduced the cultivation of that celebrated pear in eastern Ohio.” [History, 1890]