Asenath Nicholson - from Graham crackers to the Irish famine 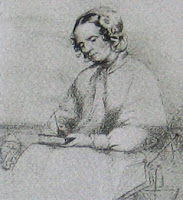 Early life
Asenath Hatch was born in Vermont and began teaching at 16.  By age 31 (1823) she managed a boarding school in Elizabethtown, NY where she met Norman Nicholson (1785-1839) a widower with three children, who she later married.  They did not have any children.

Graham boarding houses
In 1829 they moved to New York City where at first Norman was a merchant and Asenath a teacher, until she heard Sylvester Graham (1795-1851) speak and they then opened a boarding house based on Graham's vegetarian principles in 1833.  "Table boarders" who lodged elsewhere but wanted the new vegetarian diet, were encouraged to talk on any subject, and many were active in causes such as abolition, temperance and some were religious leaders.

One lodger recounted his observations during the years he lodged with the Nicholsons. Rev. Deere was four years old [1831 Nicholson had a couple students boarding in their home who she taught], when he first stayed at Mrs. N. “large and richly furnished house in what was then the most aristocratic part of the city. Sylvester Graham, the founder of the vegetarian system of living, I remember as one of her boarders.” Others in this “hotbed… new social ideas and reforms…no subject was tabooed” were the Tappans (“interested in the anti-slavery movement”), the Fowlers (Phrenology), Horace Greeley, and the Beechers (“on their way to Cincinnati”) [cookbook author Catharine’s father Lyman became first Pres. of Lane Theological Seminary]


By the fall of 1841, Deere again stayed at her “Graham boarding house on [21] Beekman Street not far from the city park” [1838-41] which still had “remnants of gentility” and in vegetarian style (only animal product allowed was milk, “feathers were tabooed” for pillows) “…she was reduced to the doing of most of her own work, and the list of her boarders was very limited. She was descending the grade rapidly to what would be called abject poverty—or, as she would put it—providence was preparing her for her mission to suffering Ireland.”

“There were no women in the house except Mrs. Nicholson and an Irish girl. The dining room was in the back parlor, shut off from the front by folding doors. Beneath was a basement under the whole house used as kitchen, wash room, and, among other things, sleeping room for Mrs. Nicholson and the girl.”  Only two lodgers (and they had to share a room), but about twelve “table boarders, all gentlemen of culture and great variety of opinion…”

Graham recipes
Her recipes in Nature's Own Book 2nd ed 1835, were for “a more rational diet, wherein may be united the pleasures of the palate, the health of the stomach, and the answering of a good conscience…. receipts are no more than the fruits of his [Graham] plan a little matured.” Those making these recipes “may be sure they will give no palpitating hearts, trembling nerves, gouty limbs, aching heads, or sleepless nights.”

Sweet Crackers  (Graham crackers?)
One tea-cup of coarse wheaten meal, one of sour milk or buttermilk, three fourths of a tea-cup of sugar, half a tea-spoonful of pearlash; made hard, rolled thin, and well baked.

The second book, A Treatise on Vegetable Diet, 1848, she warned of the poisons of coffee, tea and tobacco, and her 60 recipes for vegetarian foods. “It will be noticed that in the preceding recipes eggs and butter are left out,—eggs for two reasons; they are unnecessary, as pudding can be made as light if the milk be not scalded before putting to the bread or rice, and a little flour stirred in, and they contain the whole of the animal, and are very indigestible. Butter has no redeeming qualities in a pudding, is innutritious, unhealthy, and to a pure taste offensive. Animal oil of all kinds should be excluded, but vegetable oil is not objectionable. The pea and bean which made the countenance of Daniel fairer than any that were "defiled with the king's meat," contains much oil, and when used upon salads is not injurious.”


“The history of the Irish goes to prove, beyond all disputation, that the potatoe not only sustains life, but sustains it healthily. It keeps the machinery in a steady going forward—without aching heads, sickly stomachs, or agitated nerves, and keeps it in so quiet a state, that many live to an old age, quite beyond that of other civilized nations.”

Trips to Ireland
Nicholson traveled as a poor American staying with colleagues of her reformer friends and with the poor, keeping a diary from which she wrote about her experiences in two books.

Going to Ireland for the first 15 months was to “investigate the condition of the Irish poor.”  She returned to provide relief during the Irish potato famine, she operated a Dublin soup kitchen, gave out bread in the streets, and went to other parts of the distressed country.