These fabulous colored images are from Conditorei des Orients (1838) by Friedrich Unger, the German confectioner to King Otto I of Greece.
The first picture is a confectionery in Athens. 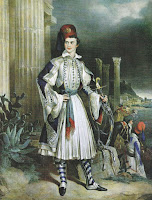 Unger accompanied the young King to "Hellas, [Greece] a country that is so close to the Orient I was overjoyed" to learn how to make the "marvels of the Eastern schekerdschian." [confectioners].  After five years of research, his book was published in Athens in 1838.

A confectioner's shop in Turkey -

Ordinary Scherbet seller - during the summer snow was brought to Athens and Constantinople from the mountains and put in the basket.  Chilled water in the hanging container dripped onto the fan below sending it spinning and hitting a nearby glass with a "bell-like sound."  The small white bottles contained flavors to add to the glass - grape or raisin syrup.  Syrup poured into a glass, the chilled water added, then poured back and forth between glasses to mix.

"Recipe: Syrup from grapes for scherbet:  The Oriental prepares syrup from grapes in almost exactly the same way as the European, as he presses the grapes, puts the juice in a pan, lets it heat up and adds a bit of ash or ground chalk to remove the sourness.  After this it is strained, reduced to a syrup on a wek flame, and then kept in big pots or bottles."

Saleb Sellers - sold from a tin container with burning coal in the bottom.  The belt holds cups and some ground ginger. 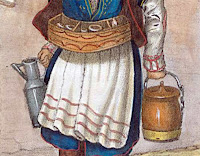 Sesame helva - sold from a board with raised edges and a cutter.

Translated book: A King's Confectioner in the Orient: Friedrich Unger, court confectioner to King Otto I of Greece / Friedrich Unger ; translated from the German by Merete Cakmak and Renate Ömerogullari ; edited with a commentary by Priscilla Mary Işin.  London: Kegan Paul, 2003