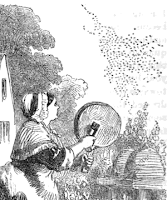 "Why does the old lady knock with her key on a frying-pan?"  Bees swarm when the hives "be too much crowded by the young brood" and the weather warms in late April or May.  To settle/calm the bees into an empty hive people would beat a kettle, pan or ring a little bell.  Perhaps to sound like thunder or it was done to claim ownership of the swarm.

"‘Tis not unusual to ring a little Bell, or tinckle a Brass Pan at the Time they have swarmed; this Sound makes an Impression upon them and almost instantaneously composes their Disorder; they may possibly mistake it for Thunder, and to be the Forerunner of a heavy Storm, for they will very soon make to the Hive prepared for them by way of Shelter." [1773]

The image of a man tanging bees to his empty cone hive is from the cover of a c1669 book printed in Amsterdam Den Naarstigen byen-houder in the Moir Rare Book Collection at the National Library of Scotland (which contains 250 items on bees from 1525 onward).

The author of The English Apiary, 1721 thought "The ringing of Basons and Pans is needles, for they will settle of themselves..."   However in 1780 The Practical Bee-master by Keys learned that the practice really did work.  "Many times I have forebore tinkling until they were almost out of my premises; but on striking up a serenade upon a large watering pot, they have always settled; and I have never lost a Swarm, since I have used this method, or had them settle at any great distance."

THE SWARM OF BEES.
"Why does the old lady knock with her key on a frying-pan? She is trying by her noise to make a swarm of bees alight in her garden. In old times it was thought bees could be tolled down in some such manner. But bees have ways and habits all their own.

Bees are governed by a queen. One queen rules the hive; and in a well-proportioned hive of about twenty thousand bees, besides the queen, there are about nineteen thousand workers. ..

Every year, in the early part of summer, one or two swarms leave the old hive to find a new home elsewhere.

Before leaving, they send out spies to find a good and suitable spot, who come back and report accordingly. The hive exhibits a scene of unusual buzzing and business, a day or two before the new colony emigrate. Rainy or cloudy weather will keep them back, but on the next sunshiny day the whole hive is in motion; and by and by the young queen and her attendants, followed by her great emigrant train, issue forth and take flight to form a new kingdom."   [1861]


Hiving The Swarms Of.
"Bees, as has been observed, never swarm till the hive be too much crowded by the young brood. They first swarm in May, or in the end of April, but earlier or later according to the warmth of the season. They seldom swarm before ten in the morning, and seldom later than three in the afternoon. …  it is usual to beat on a kettle or fryingpan: This practice may have taken it; rise from observing, that thunder or any great noise prompts bees in the fields to return home. As soon as the swarm is settled, the bees which compose it should be got into a hive with all convenient speed, to prevent their taking wing again." [1816]

"General Directions on Swarming.—An absurd custom, says Mr. Taylor, is very general of beating a metal pan, or some such sonorous thing, on the occasion of bee-swarming; this is called tanging the bees. The practice, doubtless, originated in the precaution formerly observed of ringing a bell, or giving some signal of the flight of bees, with a view to an identification of the property in case of its straying to a distance.

By degrees the idea became prevalent that the bees themselves were the parties interested in the hubbub.

a passage in the Fasti of Ovid which attributes to it a far more venerable antiquity. "They report," says the poet, "that honey was discovered by Bacchus. … The cymbal-bearing hands of the attendants gave forth a clang. Behold, impelled by the sound, unknown winged creatures swarm together, and the sounds which the brasses produce, the bees pursue. Bacchus collects them as they flit about, and shuts them up in a hollow tree, and he has his reward in the discovery of honey."

…But to return to the tanging. It is clear, not from this mythological story alone, but from what immediately follows in our own author, that this clamour does affect the bees, but affects them in the wrong way; so we leave the question for further decision to those better versed in antiquarian lore. Mr. Taylor continues that as regards the bees the proceeding is worse than useless, as it frequently prevents their settling so soon as they would do if left quietly to themselves. The drenching or anointing of a hive, intended for a swarm, with any kind of material, is another common practice much better avoided. A dry clean hive is preferable; only, if of straw, cutting off the loose ends." [1880]