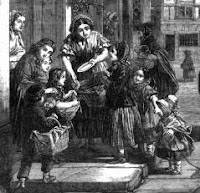 Hot Cross Buns stored for a year?  Cornish folklore- "In some of our farmhouses the Good Friday cake may be seen hanging to the bacon-rack, slowly diminishing..."  Poor Robin's Almanack of 1753 noted it would not get moldy and was used to cure illnesses in humans and farm animals.

CROSS-BUNS ON GOOD FRIDAY. Few of the sweet memories of childhood possess so strong a hold upon our affections as the incidents of “Hot-cross Bun Day"—Good Friday, or Holy Friday. Many a time and oft have we been awakened upon the holy morn by the early shrill cry of “One a penny bun Two a penny buns—all hot!” and, although this cry is most familiar to those “in populous city pent,” the simplicity of the celebration is not a little aided by its being shifted to the country, where the interest of many a scene of artless enjoyment, such as our Artist has portrayed, was, doubtless, yesterday brought home to the bosoms of the larger growth.

In the scene before us what delight is depicted in the several faces of the groups of children attracted by the buns, as well as in the sellers themselves! The housekeepers are on the look out for their Good Friday breakfast-buns. The baker's shop is open; but the holier character of the day is kept in remembrance by the church tower in the distance and the guardian yew-tree…The smallest child has left its toycart for the bun; the faces of the little recipients are lit up with smiles, which are reflected in the faces of the lookers-on; and the satisfaction of the boy who is eating his bun in the right-hand corner of the picture is most complete. But … the smallest child may express some curiosity as to the cross upon the buns of this day, not to be seen at any other time of the year.

How many fond mothers, almost as early as they have taught their offspring to place their little hands in prayer, may have also made the young inquirers in part sensible of the significance of the cross upon the bun, and thus breathed to them the first parental lesson upon our great Christian festival– the commemoration of our Saviour's suffering which hath been kept from the very first age of Christianity!

The cross-bun has been referred to higher antiquity than Good Friday. The word “bun” is derived from the early Greeks; and we see the cake or bun depicted in their sculptures and paintings. Winckelmann discovered two buns at Herculaneum, each marked with a cross, and within it four other lines. …However this may be, the holiest association is attached to the bun of Good Friday; and the practice of making cross-buns on this day is supposed to have originated simply in the desire of marking on the only food anciently allowed on this solemn fast the symbol of the Crucifixion. Our Saxon ancestors denominated it “Long Friday,” perhaps in allusion to the length of the fast.

We have heard of persons keeping a bun from year to year, in the belief of its efficacy in the cure of diseases; and Poor Robin, in his Almanack for 1753, says of buns so stored Whose virtue is, if you believe what's said, They'll not grow mouldy, like the common bread.

the folk-lore of a Cornish village, says: "In some of our farmhouses the Good Friday cake may be seen hanging to the bacon-rack, slowly diminishing until the return of the season replaces it by a fresh one. It is of sovereign good in all manner of diseases that may afflict the family or the cattle, have seen a little of this cake fed into a warm mash for a sick cow.” 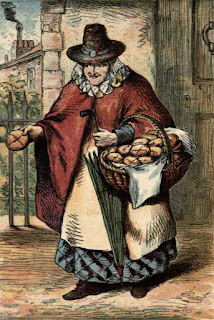