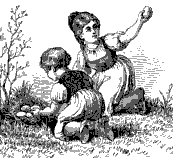 It is very interesting, to those of us raised accepting a bunny delivered Easter eggs, that writers outside of Germany and the German areas of the US were perplexed by the tradition.  And surprised by the egg hunt.  The following excerpts and sketches from an 1878 article also show the range of chocolate or sugared figures far exceed our chocolate bunnies and eggs...

Eggs, of course, in quantities and of all sizes, from that of an ostrich to a humming bird’s, made of chocolate or of sugar, and gayly decorated with little ribbons and pictures. Then there were fat little unfledged chickens, some just emerging from their shells, some not an inch long, and others large as life; pure white lambs, with ribbons and bells round their necks; paste eggs, with holes at the ends, and, looking through, behold, a panorama inside! and eggs with roses on one side, which, when blown upon, emit a musical sound.

But odder than all these were the goats playing on guitars, or dragging behind them fairy-like eggshaped carriages, with little hares gravely driving; and in others of these carriages were reclining one or two (generally two) baby hares, or a hare mother rocking her little one in an egg cradle ; there were sugar balloons, in the baskets of which hares watched over their nests full of eggs; wheelbarrows full of eggs, and trundled by a hare; and dainty baskets of flowers, with birds perched upon each handle, peering down into nests of eggs half hidden amidst the blossoms.

Every old woman in the marketplace offers for sale a store of hard-boiled eggs, smeared over with some highly colored varnish, besides candy chickens, hares, etc., in abundance. All the various shop windows display pretty emblematic articles. Besides the sugar and chocolate eggs, there are eggs of soap and of glass; eggshaped baskets and reticules; leather eggs, which really are ladies’ companions, and filled with sewing implements; wooden eggs and porcelain eggs, and even egg-shaped lockets made of solid gold.

It would be difficult to explain why these things appear at Easter, and what they all mean. The eggs, as every one knows, we have at home, and where they are in such abundance chickens will not be very far away. For the lamb and the goat we can find scriptural interpretations, but the rabbit and the hare—what can they have to do with Easter? Nine persons out of ten can only answer, “The hares lay the Easter eggs.”  Queer hares they must be, indeed, but the children here believe it as devoutly as they do that the “Christkind” brings their Christmas presents, or as our little ones do in Santa Claus. The custom has found its way even to America, but nowhere out of the Vaterland are the eggs laid by the timid hare.

To this day children living in the country go to the woods just before Easter, and return with their arms full of twigs and moss, out of which they build nests and houses, each child carefully marking his own with his name.  They are then hidden behind stones and bushes in the garden, or, if the weather be cold, in corners, or under furniture in the house. And on Easter morning what an by the peasantry in many parts of the country, excitement there is to see what the good little hare brought!  Not only real eggs boiled and colored, but sugar ones too, and often wooden ones that open like boxes, disclosing, perhaps, a pair of new gloves or a bright ribbon. He even sometimes brings hoops and skipping-ropes, and generally his own effigy in dough or candy is found trying to scamper away behind the nest.

Egg Games
Then what fun they have playing with the eggs, [1] throwing them in the air and catching them again, [2] rolling them on the floor, [3] exchanging with each other, and [4] knocking them! This game [Knocking] is played by two, each child holding an egg firmly in his hand, so that only the small end appears between the thumb and forefinger, or under the little finger. The two eggs then are knocked smartly against each other until one cracks, when it becomes the property of the victorious party, who adds it to his stock. Those who have never tried to break an egg in this way will be astonished to find how many hard taps it is able to stand. But, as the game called “picking eggs” is played in some parts of the United States during the Easter holidays, it may be that many of our readers know all about this matter, and understand very well how to select the eggs that shall prove strong and victorious. 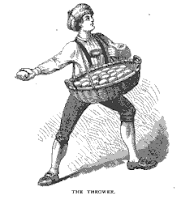 Easter Monday … [Throwing/catching eggs] the contestants are gayly decked with ribbons, a band strikes up a lively air, a capering clown clears the way, and the 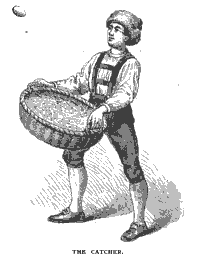 game begins. He who throws takes the eggs, and one after another swiftly whirls them the length of the course, and into the chaff-filled basket, which is held in the hands of an assistant. Occasionally he makes a diversion by pitching a hard one to be scrambled for by the crowds of children who have assembled to see the sport. Meantime (while wagers are laid as to who will likely win) the other contestant speeds the distance of a mile or two to an appointed goal, marks it as proof of his having touched it, and if he succeeds in returning before all the eggs are thrown, the victory and the prize are his, otherwise they belong to his opponent. The game finished, the prize is presented to the victor with due ceremony and amid the cheers of the crowd; the hard eggs are distributed among the company, and the raw ones carried uproariously into the neighboring inn, there to be cooked in various ways and eaten.