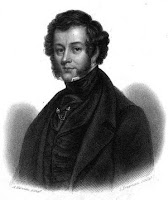 In the new PBS/ITV series Francatelli is portrayed by Ferdinand Kingsley, son of British actor Ben Kingsley.  What I have seen thus far he is wooing one of the staff and talked about making the Feb 10, 1840 wedding cake.  Actually he started working for the Queen a month after the wedding on March 9, 1840 for 250 pounds a year (see Smithe's lengthy bio, link below). 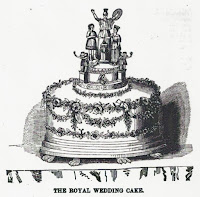 I hope the series shows him cooking or the dinner table, AND some of the "broils and ill feeling" among the kitchen staff culminating in his insulting the deputy comptroller, so a policeman was called but our guy "managed to make his escape."  On Dec 1 the Lord Steward held an investigation, and he was suspended "until the matter shall be laid before her Majesty and Prince Albert."

BIOGRAPHY    in his introduction to The Modern Cook, 1846 :
"The Author hopes he shall be excused for alluding to himself, and his pretensions for writing a book of this kind. Although bearing a foreign name, he is happy in being an Englishman. He received his professional education in Paris, and acquired a knowledge of his art in some of the most celebrated cuisines of that capital, and was so fortunate as to become a pupil of the renowned Carème. [1784-1833] Qualified under such favourable auspices, he has subsequently served—he hopes with satisfaction to his patrons—some of the most distinguished bons vivants among the British aristocracy and gentry. He has had the good fortune to be Chef-decuisine to the Earl of Chesterfield; Lord Kinnaird; and to Sir W. Massey Stanley, Bart. and Rowland Errington, Esq., at Melton Mowbray; and he shall ever consider it the greatest honour to which he could aspire, to have served as Chief Cook, and Maitre d’Hotel, to her Most Gracious Majesty the Queen.  LONDON : 21st February, 1846." 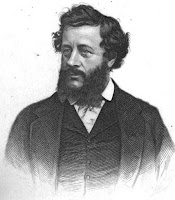 WHY HE LEFT THE QUEEN'S SERVICE 1842
The first reason - "Fracas at Buckingham Palace" - was reported in the newspaper:

On Tuesday [Dec 1] a long investigation took place at the Board of Green Cloth, before the Lord Steward of the Household, when nearly twenty persons of the royal establishment were examined respecting an affray between Mr. Norton, the deputy comptroller of her Majesty’s household, and Mr. Francatelli, chief cook of the royal kitchen.  It appears that broils and ill-feeling to a great extent have been for some time existing in the royal establishment: and on Monday Mr. Francatelli took an opportunity of insulting Mr. Norton in the presence of all the pages and about forty others, when high words ensued, which ended in a policeman being sent for to take Mr. Francatelli into custody, but he managed to make his escape before the officer arrived.  The result of the investigation has been the suspension of Mr. Francatelli until the matter shall be laid before her Majesty and Prince Albert, when it is thought that measures will be adopted to prevent a recurrence of such proceedings."

The second possible reason - that the Queen preferred the English cookbook authors food - was proposed by the novelist Catherine Gore (she had just returned from nine years in Paris). Gore wrote in the article "The French Cook" that the French used the title 'chef' while the English used 'cook'.  She felt the Queen preferred the English recipes of Glasse or Rundell, and French cooks were only appreciated in British clubs and hotels.

“The only houses where [the French Cooks]... obtain any ascendency are the clubs and hotels. …under Victoria, the anything but faineante [idler] Queen, Francatelli, the Coriolanus of Pimlico, was banished the royal kitchen! … and some hideous Mrs. Glasse, or detestable Mrs. Rundell, be found presiding over the ragouts of Majesty.  As sure as… future travelers will come to the stately furnaces and stoves of Windsor Castle, and cry aloud, - ‘Where is the French cook?” and echo will reply, in a plaintive voice,- “Where is the French Cook!”” [Bentley's 1842]

After working for 8 years at the famed Reform Club [Alexis Soyer, their first chef from 1837-1850, designed the state of the art kitchen], Francatelli wrote The Cook's Guide and Housekeeper's & Butler's Assistant (1861), and The Royal English and Foreign Confectionery Book (1862). He then worked for the Prince and Princess of Wales for a few years.

In order to carry out my instructions properly, a few utensils will be
necessary.  A portion of this [money saved] will be well spent in the purchase of
the following articles:--
A cooking-stove, with an oven at the side, or placed under the grate, which should be so planned as to admit of the fire being open or closed at will; by this contrivance much heat and fuel are economized; there should also be a boiler at the back of the grate. By this means you would have hot water always ready at hand, the advantage of which is considerable. Such poor men's cooking-stoves exist, on a large scale, in all modern-built lodging-houses. Also, a three-gallon iron pot with a lid to it, a one-gallon saucepan, a two-quart ditto, a frying-pan, a gridiron, and a strong tin baking-dish.

Here is a list of the cost prices at which the above-named articles, as
well as a few others equally necessary, may be obtained of all
ironmongers:--
L  _s._ _d._

A la Russe from The Royal English and Foreign Confectioner, 1862

"Among the various changes which of late years have affected our time-honoured regulations of the dinner table, none have brought about so complete a revolution in their manner, style, and character as the introduction into this country of serving all, or nearly all, recherchis dinners A La Russe. This fashion, I need hardly say, consists in the excellent practice of having the whole of the dinner carved and served from the sideboards, whereby not only expense and much extravagance are saved, but the comfort of the guests—a matter of no little importance—is enhanced, by doing away with the annoyance arising from the removal of the various dishes over their heads."

COOKBOOKS NOT MAKE HIM MONEY
"This book seems to have passed immediately out of Francatelli's possession and became the very valuable property of the publishers, for the book was favored by the aristocracy, it complimented many of its members, and sold well. The greatest profit of all, probably, has been realized by its American re-publishers, who have advertised it frantically and reaped rich returns. This, of course, was of no benefit to either Francatelli or his family. Of Francatelli himself it is scarcely possible to find any printed particulars. He was at one time chef to the Reform Club, chef to the Queen, chef at the St. James Hotel, Piccadilly, London, manager of the Free Masons' Tavern, London. He died about 1870 [1876]. A London hotel, advertising in 1886, among other attractions announced that the services of Mr. Francatelli had been secured as chef. A London journal, noticing the ruse, hastened to proclaim that it was a son of the great Francatelli who had been engaged. About the same time an appeal for charity appeared in the London trade papers in behalf of Francatelli's daughter, who was described as being in a very destitute condition, and the smallest contributions of those who desired to lend a helping hand would be thankfully received." [Whitehead]

The Modern Cook. London: 1846
A Plain Cookery Book for the Working Classes. 1852
The Cook's Guide, and Housekeeper's & Butler's Assistant. 1857
The royal English and foreign confectioner. 1862