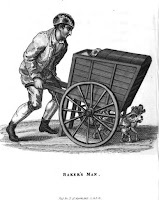 
"Nearly all the barking done in New York—and there is a good deal of it —is done by the terriers that keep watch in the bakers’ carts. These fierce little animals are generally of the rough Scotch or common black and tan breeds.

They are very aggressive, barking furiously at everybody and everything along the route, and thus “drawing the fire” of the town dogs, troops of which will sometimes follow a baker’s cart for a long-distance, in full yelp, as if demanding bread, though their only object is to resent the insulting and ribald language of the pampered animal who barks himself hoarse at them from the cart.

These terriers are very vigilant while the baker is absent for a short while from his cart, engaged in delivering bread. If anybody stops to look at them they display the wildest fury, gnashing their teeth and barking with a frenzy peculiar to dogs having a mission to fulfil. Touch the cart with the tip of your cane, and immediately the fierce little guardian of the vehicle leaps from it and makes straight for your legs, to defend which from his vigorous assaults all your powers of fencing will be put to the test.

The baker’s dog is an object of general scurrility. Every street-boy makes faces and yells at him as he hurries past in the bread-cart..."
“New York Dogs” The Atlantic  May, 1872