Richard Dolby's The Cook's Dictionary and the Thatched House Tavern 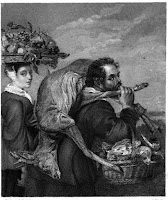 This extensive 1830 cooking dictionary is remarkable because it was touted as the first cookbook set in alphabetical order.  Also Dolby was the second cook-turned-author from the famed Thatched-House Tavern.  The frontispiece is left.

Michael Willis (c1786-1844) cook and relative of the Thatched House Tavern owners, wrote two small cookbooks in 1824 and 1831. For a previous post on the Tavern and the first cookbook HERE and more on the Willis family HERE

Richard Dolby the "late cook at the Thatched House Tavern, St. James's Street" stressed in his introductory advertisement that "the Work is not only substantially new, but composed upon a plan entirely original. The arrangement is alphahetical, at once the simplest and best for reference; yet it has never hitherto been adopted by writers on Cookery." His first edition of 1830, was so popular that in 1832 and 1833 he came out with new and revised editions adding more recipes, bills of fare, table settings and a chart of vegetables/fruits/meat in season.

A reviewer in Colburn's New Monthly Magazine, 1830 described the new "alphabetical form in a cookery book" and the thousands of recipes included new ones "are expressed in a direct and forcible style, as coming from one who knows what he is talking about, who feels the full importance of the topics, and has a proper confidence in his own large experience and his own consequent superiority."  Dolby "himself the master cook of the Thatched House Tavern, and all the world know what excellent dinners may be had there for paying for them."

Dolby was at Fleet Street in 1840 when he was on the committee of the Hotel and Tavern Keepers' Provident Institution for needy workers.


A NEW FAMILY MANUAL OF


A PLAN OF READY REFERENCE


INCLUDING NUMEROUS NEW RECEIPTS, THE MOST APPROVED MODERN BILLS OF FARE,


AND FASHIONABLE PLANS FOR LAYING OUT THE TABLE.