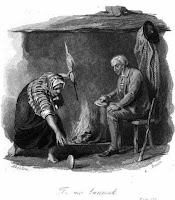 Until recently, Christmas was not celebrated in Scotland. Hogmanay became the major holiday with its many traditions, including handing out bannock or oatcakes to needy children.  They wore a sheet or tartan folded in front, or a large pocket to hold their cakes on the last day of the year. Geese and turkies were sold in incredible displays on poulterer shops (image below).


While Christmas day was to be subdued according to the church in Scotland, Hogmanay became a celebration involving fires, gifts of oakcakes, sweet cakes or cheese, first footing, and now fireworks.

Oranges were bought on the street, causing even the fish-barrows contained them, one dealer said he sold six large crates in 1850s on New Years Day in Edinburgh.

The following excerpts are from 19th century books.  Click on images to enlarge.  The first paragraphs are from Chambers 1826 -

It is still customary, in retired and primitive towns, for the children of the poorer class of people to get themselves on that morning swaddled in a great sheet, doubled up in front, so as to form a vast pocket, and then to go along the streets in little hands, calling at the doors of the wealthier classes for an expected dole of oaten bread.

Each child gets one quadrant section of oat-cake (sometimes, in the case of particular favourites, improved by an addition of cheese), and this is called their hogmanay. In expectation of the large demands thus made upon them, the housewives busy themselves for several days beforehand in preparing a suitable quantity of cakes. A particular individual, in my own knowledge, has frequently resolved two bolls of meal into hogmanay cakes.

The children, on coming to the door, cry ‘Hogmanay !’ which is in itself a sufficient announcement of their demands; but there are other exclamations, which either are or might be used for the same purpose. One of these is—

Hogmanay,
Trollolay,
Give us of your white bread, and none of your gray !

It is no unpleasing scene, during the forenoon, to see the children going laden home, each with his large apron bellying out before him, stuffed full of cakes, and perhaps scarcely able to waddle under the load. Such a mass of oaten alms is no inconsiderable addition to the comfort of the poor man’s household, and tends to make the season still more worthy of its jocund title.

Bannock “Cakes of oaten or barley meal, hardened on an iron plate over the fire, or on a heater in front.”  [Chambers] 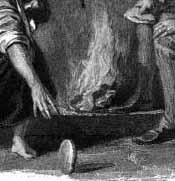 The children of the poorer people go about from door to door either with a large pocket fastened to their dress, or with a sheet-shawl, or plaid, so folded about them as to leave a large fold in front. Each child gets an oat-cake, or a piece of cheese, or sometimes, if the donor be very liberal or the children especial favourites, a sweet cake, and so from door to door they go until in the evening they have a plentiful supply of homely New Year cheer to carry home to their family.

This is the original custom, but now-a-days, like many other customs, it is dying away, children going for their Hogmanay to the houses of their friends more as a custom than from any desire for the gifts then distributed. At no time, however, were these Hogmanay cakes ever looked upon as eleemosynary. They were rather looked upon as a right, established by time-honoured custom.  [Dickens]

At the greengrocers' doors are hanging the bunches of laurel, holly, and mistletoe, and in the butchers'

and poulterers' shops the festive beef, geese, and turkeys with which we are all familiar, as the sine qua nons of Christmas cheer.  [Dickens]

Hogmanay - source of name
What is precisely meant by the mysterious word hogmanay, or by the still more inexplicable trollolay, has been a subject fertile in dispute to Scottish antiquaries, as the reader will find by an inspection of the Archwologia Scottica. A suggestion of the late Professor Robison of Edinburgh seems the best, that the word hogmanay was derived from ‘Au gui menez’ (‘To the mistletoe go’), which mummers formerly cried in France at Christmas. At the same time, it was customary for these persons to rush unceremoniously into houses, playing antic tricks, and bullying the inmates for money and choice victuals, crying, ‘Tire-lire (referring to a small money-box they carried), maint du blanc, et point du bus.’  [Chambers]

I think hog-ma-nay means hug-me-now—Hawse and ney, the old nurse term, meaning,"kiss me, and I'm pleased," runs somewhat near it: ney or nay, may be a variation that time has made on now. Kissing, long ago, was a thing much more common than at present. [MacTaggart]