Quern in 1772 Scotland... and fulling wool by foot

In late 18th century Hebrides in areas without mills, grain ("corn" - wheat) was ground in a hand mill (quern). To the right ten women are depicted fulling wool by hand or feet on a ridged board (Luagh).  A bagpiper is near the tree.

Thomas Pennant, in his work A Tour in Scotland and Voyage to the Hebrides, 1772 described and depicted the hand mill, as well as the singing to keep time while harvesting, grinding the grain and working the wool: 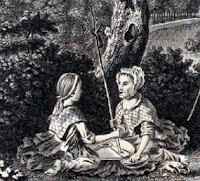 Quern
"The quern or bra is made in some of the neighboring counties in the mainland, and costs about fourteen shillings. This method of grinding is very tedious: for it employs two pair of hands four hours to grind only a single bushel of corn.

Instead of a hair sieve to sift the meal the inhabitants here have an ingenious substitute, a sheep's skin stretched round a hoop, and perforated with small holes make with a hot iron. They knead their bannock with water only, and bake or rather toast it, by laying it upright against a stone placed near the fire."

'Water-mills' - querns destroyed
"Singing at the Quern is now almost out of date since the introduction of water-mills. The laird can oblige his tenants, as in England, to make use of this more expeditious kind of grinding; and empowers his miller to search out and break any Querns he can find, as machines that defraud him of the toll. Many centuries past, the legislature attempted to discourage these aukward mills, so prejudicial to the landlords, who had been at the expence of others. In 1284, in the time of Alexander III it was provided, that “na man sall presume to grind qubeit, maishloch, or rye, with hand mylne, except he be compelled by storm, or be in lack of mills…”

Roasting 'corn' (grain - wheat)
"Notwithstanding this island [Isle of Rum] has several streams, here is not a single mile [mill]; all the molinary operations are done at home: the corn is graddan'd, or burnt out of the ear, instead of being thrashed: this is performed two ways; first, by cutting off the ears, and drying them in a kiln, then setting fire to them on a floor, and picking out the grains, by this operation rendered as black as coal. The other method is more expeditious, for the whole sheaf is burnt, without the trouble of cutting off the ears: a most ruinous practice, as it destroys both thatch and manure, and on that account has been wisely prohibited in some of the islands. Gradanned corn was the parched corn of Holy Writ..."

Walking of the wool cloth

"...Luagh, or, walking of cloth, a substitute for the fulling-mill: twelve or fourteen women, divided into two equal numbers, sit down on each side of a long board, ribbed lengthways, placing the cloth on it: first they begin to work it backwards and forwards with their hands, singing at the same time, as at the Quern: when they have tired their hands, every female uses her feet for the same purpose, and six or seven pair of naked feet are in the most violent agitation, working one against the other: as by this time they grow very earnest in their labors, the fury of the song rises; at length it arrives to such a pitch, that without breach of charity you would imagine a troop of female demoniacs to have been assembled."

Bagpiper
"They sing in the same manner when they are cutting down the corn, when thirty or forty join in chorus, keeping time to the sound of a bagpipe... The subject of the songs at the Luaghadh, the Quern, and on this occasion, are sometimes love, sometimes panegyric, and often a rehearsal of the deeds of the ancient heroes, but commonly all the tunes flow and melancholy."