The citron growing on a tree was imported as a sweetmeat.  Amelia Simmons had, in her 1796 cookbook, a mock citron recipe entitled 'The American Citron' - using watermelon.  The following recipe is Lea's candied citron recipe using a Citron Melon.

Candied citron was one of the ingredients for holiday fruit cakes.  The citron, although looks similar to a lemon, is not used for juice, but for it's very thick pith, which is candied.  Initially, watermelon rind was used as a local substitute for the imported citrus citron.

Take the rind of a large watermelon not too ripe, cut it into small pieces, take two pound of loaf sugar, one pint of water, put it all into a kettle, let it boil gently for four hours, then put it into pots for use.

Maryland cookbook author Elizabeth Ellicott Lea put the hard, rather bland fruit through numerous boilings to transform it into a candied citron sweetmeat in 1846. The American edition (Boston, 1798) of Richard Briggs' The New Art of Cookery contained a candied citron melon.


Citron Melon.  Lea, 1846
Pare the melon and cut it in slices half an inch thick, without the seeds; let it lay in salt and water for an hour, then wash the salt off, and boil it in strong ginger tea; make a thin syrup and boil it again, then make a syrup of a pound of loaf-sugar to a pound of citron, and boil it in this till it is clear; season it with mace and lemon peel.

Modern trial
Cut the melon from end to end - rather than what I did (like a cantaloupe). "Cut the citron melon in halves each way, then cut each quarter in three quarter-inch slices from the stem and blossom ends to the middle. In this way you cut across the seeds and they can be more easily removed than if the melon be cut in the same direction that the seeds lie."  [American, 1896]

Peel, remove the vibrantly red seeds, then soak in salt water.  Rinse.   Eliza Leslie used alum after the salt in the initial soaking.  Next, peel a piece of ginger root and boil it in water.  Add the melon pieces and boil.  Boil some sugar in water and boil the melon again.  Make a final sugar syrup in equal proportions of sugar to melon.  Add strips of lemon zest and mace; boil until translucent.  "...the syrup must be first boiled, and then put in the fruit, and boil all together." [Dolby, 1830]

The mock citron actually filled many more than three jars (I plan to try Lea's watermelon rind next).  But the slices do shrink down, like pumpkins, so figure size you want accordingly, Lea stated a half inch thick. 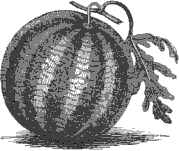 Fruit nearly spherical, six or seven inches in diameter; color pale green, marbled with darker shades of green; flesh white, solid, tough, seedy, and very squashy and unpalatable in its crude state. It ripens late in the season, and will keep until December. "It is employed in the making of sweetmeats and preserves by removing the rind, or skin, and seeds, cutting the flesh into convenient bits, and boiling in sirup which has been flavored with ginger, lemon, or some agreeable article. Its cultivation is the same as that of other kinds of melons." — "New American Cyclopaedia."  [Burr, 1866]