The first Manual for Army Cooks cookbook published in 1910 contained holiday menus and a large scale recipe for pumpkin pies.  The following pumpkin pie is quite good, and beat a modern recipe during a Thanksgiving Dinner taste-testing. 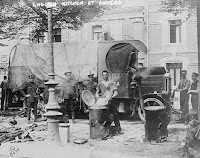 
Peel and clean the pumpkin; cut into pieces about 2 ounces each; pour 1 inch of water into a boiler; then put in the pumpkin. One inch of water will be sufficient, even though the boiler be filled with pumpkin, as pumpkin (or squash) contains much water. Let boil slowly until done, say forty minutes. Then mash well, add the beaten eggs, sugar, milk, and spices and mix well; make the pies without a top crust, and bake slowly. This recipe may be improved by the addition of a small amount of cream, or of one or more eggs. Sufficient for about 15 pies.
Manual for Army Cooks, 1910 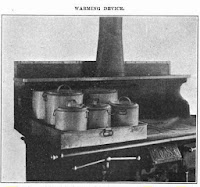