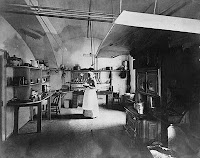 Numerous recipes have been named to honor the Presidents including Washington Cakes, which were discussed in a previous posting HERE. Period recipes for Washington Pie, Madison Cake, Jackson Jumbles, Harrison Cake, Tyler Pudding, and Lincoln Cake are given below.  ...

WASHINGTON PIE
Three quarters of a pound of sugar; half a pound of butter beat to a cream; add a cup of cream, half a teaspoonful of saleratus, six eggs beat up well; flavor it with lemon; add a pound of flour; bake it in round tin pans, or a wooden box-cover, about fifteen or twenty minutes; when cold, lay one on a plate, and spread over it marmalade, or any other jelly, as thick as the cake; then cover it with another cake. Frost it, or not, as you please.
Mrs. Putnam's Receipt Book. NY: 1860

The White House Cook Book, 1890 by Fanny Gillette stated: "This recipe is the same as 'Boston Cream Pie'"

MADISON CAKE
Pick clean two pounds of sultana raisins, (those that have no seeds,) and cut them in half. If you cannot procure the sultana, use the bloom or muscatel raisins, removing all the seeds. When the raisins are cut in two, dredge them thickly on all sides with flour, to prevent their sinking or clodding in the cake while baking. Sift into a pan a pound and three quarters (not more) of flour. Cut up a pound of fresh butter into a deep pan. Mix with it a pound of white lump-sugar finely powdered; and stir them together till they become a thick, white, cream. Have ready a teaspoonful of powdered nutmeg, and a table-spoonful of powdered cinnamon, and mix these spices, gradually, with the butter and sugar. Beat fourteen eggs (not fewer) till very light and thick. Then stir them, gradually, into the beaten butter and sugar, alternately with the flour and a pint of rich milk, (sour milk will be best.) Add at the last a very small tea-spoonful of pearlash, or of bi-carbonate of soda, dissolved in a large wine-glass of brandy. Give the whole a hard stirring, and then put it immediately into a deep circular tin pan, the sides and bottom of which have been first well greased with fresh butter. Set it directly into a well-heated oven, and let it bake from five to six hours, according to its size. It requires long and steady baking. When cool, cover it (top and sides) with a thick icing, made in the usual way of beaten white of egg and sugar, and flavoured with rose-water or lemon.

If the above directions are closely followed this will be found a very fine cake, and it will keep soft and fresh a week if the air is carefully excluded from it.

It will be still better, if in addition to the two pounds of raisins, you mix in two pounds of Zante currants, picked, washed, dried before the fire, and then well floured. Half a pound of citron cut into slips and floured, may also be added.
Leslie, Eliza. The Lady's Receipt Book. Philadelphia: Carey and Hart, 1847

JACKSON JUMBLES
Three tea-cups of sugar, one of butter, five of flour, one tea-spoonful of salæratus in a cup of sour cream and two eggs; bake in a quick oven; season them with the peel of a fresh lemon grated, and half a wine-glass of brandy.
Lea, Elizabeth Ellicott. Domestic Cookery. Baltimore: Cushings and Bailey, 1869

HARRISON CAKE
Two cups of molasses, one of butter, one of sugar, one of sour cream, a teaspoonful of powdered clove, two teaspoonfuls of saleratus, and two teacups of currants. The butter should be cut small and put into a sauce-pan with the molasses. Melt them thoroughly together and pour the mixture upon three or four cups of flour; then add the sugar and half the cream. Put in the rest of the cream when you have dissolved the saleratus in it. Take enough more flour to make it about as thick as cup cake; stir it ten or fifteen minutes, add the currants, and bake it in pans like cup cake. Take care that it does not burn. This is excellent cake, far better than some which is more costly.
The Young Housekeeper's Friend. Mary Cornelius. Boston: 1846

LINCOLN CAKE
Two eggs, two cups of sugar, half a cup of butter, one cup of sweet milk, three cups of flour, one teaspoonful of extract of lemon, one of cream tartar, and half a teaspoonful soda.
Arthur's Home Magazine. July 1869 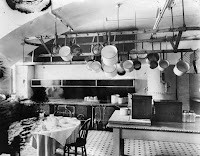 "Who was ungallant enough to say the housewife takes no interest in her country's affairs? Let certain favorite cakes rise up and rebuke him. There is Martha Washington and George Washington cake. Lincoln cake and General Jackson election cake, which "once tried is always elected for a second term"; Tilden and Cleveland cakes, Old Hickory cake, Liberty, Freedom and Fourth-of-July cakes, Columbus cake, Old Rough-and-Ready (General Zachary Taylor) cake, and Phil Sheridan cake. There are hard times cake, prosperity, sixteen-to-one, goldstandard, gold, silver and gold-and-silver cakes. Politicians ought not to go hungry for sweet cakes while there is this wide range to choose from."  [Every Where, Jan 1911]

The photographs are from the Library of Congress