Many period pictures and modern photographs show original and reproduction tools to make chocolate - roaster, metate, and chocolate pots.  Quotes from old books describe the process, and modern suggestions are given in the following post.

This posting is about some of the historic or reproduction equipment needed to make chocolate at home or museum setting.  For suggestions on modern equipment, the website Chocolate Alchemy describes the process of roasting, grinding, conching, etc. on a small scale.  He suggests using the Champion Juicer to grind the nibs.  For more information on making cocoa see Cocoa and Chocolate Beverages

Very briefly [more details with period pictures will be posted at a later time], chocolate is made from the seeds of the cacao tree.  The seed pods are picked, opened, and the seeds fermented for a few days then dried.  The beans are roasted in a pan, pot or coffee/chocolate roaster [see below] at the hearth.  The shells are removed leaving the usable chocolate "nibs."  The nibs must be ground down into a paste by using a metate and mano, stone or steel, or in a choclate mill. Further grinding, conching, results in a smooth texture.  The 19th century brought the cocoa press resulting in the seperation of powder from cocoa butter.

In the 1762 Diderot image of a chocolate factory in Paris (above), the beans are roasting in the pot to the left.  Once cooled, the shells are seperated from the beans in a flat basket in the front.  The nibs are worked on the stone under the window.

Beans and nibs.  I have found nibs locally, and unroasted beans are available on line at various sites.  One is the above mentioned Chocolate Alchemy

Roaster.   If you get unroasted beans, use a coffee or chocolate roaster or a pan over the coals. Peter Goebel of Goosebay makes a reproduction roaster, at right.

Metates or chocolate stones with coals underneath. The nibs are crushed and eventually form a smooth liquid on the warm stone. The first sketch is from 1687 in Nicolas de Blegny's Le Bon Usage du Thé, du Caffé, et du Chocolat. The photo is at Colonial Williamsburg. Both have a container with hot coals under the metate. 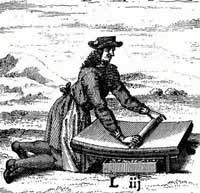 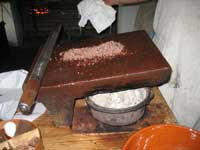 Metates can be found less expensively in Mexico, California and the southwest markets, or for alot more at Gourmet Sleuth - here To heat up the metate, you need to put coals in a container of metal or pottery under it. 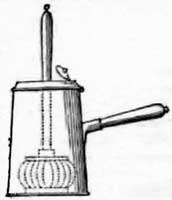 Chocolate Pots﻿.   Although from early 1800s, the sketch shows how the molinillo worked inside the pot with the handle protruding through the hole in the lid.  It is agitated to mix the cocoa with the liquid and form foam.

Reproduction pots can be obtained from Goosebay which has two styles of tin lined copper pots, c1740 with European style muller; and a French/Dutch c1703 from Fortress Louisbourg. For repro oaxacan and porcelain styles click  Here where you can also purchase molinillos and metates.

Mortar and Pestle.  "The Cacao... a Seed... when they have been divested of their Shells by Fire, and are afterwards peeled, and roasted in a Bason, before a moderate Fire, they are pounded in a very hot Mortar. The Americans bruise them with an Iron Cylinder, on a flat Stone made very hot; they are then formed into a Paste, which is afterwards boiled with Sugar; and this is called plain Chocolate. But if it is to be enriched with a fine Odour, four Pounds of this Paste, and three of powdered Sugar, are worked together in a Mortar, or on some Stone..."  [Spectacle de la Nature. Noël Antoine Pluche. 1766]

"The Cacao seeds are roasted like coffee ... When the kernels are perfectly purified, they are pounded in a mortar of heated iron over burning charcoal, and thus reduced to a coarse paste, which is set to cool on a marble slab. A second rolling is bestowed with a steel cylinder on a smooth freestone, and as soon as the paste becomes sufficiently smooth, it is mixed with sugar in a hot basin and poured into tin moulds..."  [The Encyclopædia of Geography, Hugh Murray. Phila: 1837]