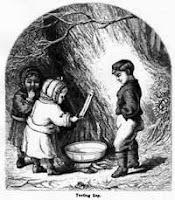 The following is an excerpt from Dr. Rush's fascinating pamphlet An Account of the Sugar Maple-tree, of the United States, and of the methods of obtaining Sugar from it, which may be viewed HERE or at the Library of Congress.

An Account of the Sugar Maple-tree, of the United States, and of the methods of obtaining Sugar from it, together with Observations upon the Advantages both public and private of this Sugar. In a Letter to Thomas Jefferson, Esq. Secretary of State of the United States…
by Benjamin Rush, M.D. Phila: 1792. 16p.

The Acer Sucharinum of Linnaeus, or the Sugar Maple-tree, grows in great quantities in the western counties of all the Middle States of the American Union. Those which grow in New-York and Pennsylvania yield the Sugar in a greater quantity that [sic] those which grow on the waters of the Ohio.

It is not injured by tapping; on the contrary, the oftener it is tapped, the more syrup is obtained from it. … From twenty-three gallons and one quart of sap procured in twenty hours from only two of these dark coloured trees, Arthur Noble, Esq. of the state of New-York obtained four pounds and thirteen ounces of good grained sugar. … The season for tapping the trees is in February, March, and April, according to the weather which occurs in these months. Warm days and frosty nights are most favourable to a plentiful discharge of sap. …

These are three methods of reducing the sap to sugar. 1. By freezing it… 2. By spontaneous evaporation...and 3. By boiling. … The sugar is improved by straining the sap through a blanket or cloth, either before or after it is half boiled. Butter, hogs lard or tallow are added to the sap in the kettle to prevent its boiling over, and lime, eggs or new-milk are mixed with it in order to clarify it. …

I am disposed to believe that the most productive method both in quantity and profit of obtaining this sugar will be by the labour of pivate [sic] families. For a great number of years many hundred private families in New-York and Pennsylvania have supplied themselves plentifully with this sugar during the whole year. I have heard of many families who have made from two to four hundred pounds in a year; and of one man who sold six hundred pounds, all made with his own hands in one season. …

A comparative view of this sugar has been frequently made with the sugar which is obtained from the West-India sugar cane, with respect to its quality price, and the possible or probable quantity that can be made of it in the United States, each of which I shall consider in order. …

But the profit of the maple tree is not confined to its sugar. It affords a most agreeable melasses, [sic] and an excellent vinegar. The sap which is suitable for these purposes is obtained after the sap which affords the sugar has ceased to flow, so that the manufactories of these different products of the maple tree, by succeeding, do not interfere with each other. …

Sugar affords the greatest quantity of nourishment in a given quantity of matter of any substance in nature; of coarse it may be preserved in less room in our houses, and may be consumed in less time… [it is] said that sugar injures the teeth, but this opinion now has so few advocates, that it does not deserve a serious refutation.
Posted by PBReber at 5:59 PM