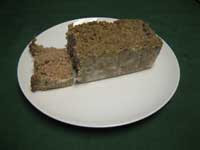 Home cooks in the past put bits and scraps of pork in a container and covered with grease/fat after each addition. It was a means of combining scraps and to preserve until ready to use...


Butchers put small pieces into an aluminum loaf pan and cover it all at once.

In the Frederick, MD and Lancaster, PA areas with a strong German heritage, scrapple and pudding are sold by butchers. While I have eaten scrapple all my life, I never tried puddin, or meat pan pudding. The puddin picture is from Hemps Meats in Jefferson near Frederick MD.

Although puddin looks like scrapple, it does not fry as a solid piece, but as small pieces of meat in melted fat. Pudding can be cooked in a steamer insert with the fat dripping into the water.

Once cooked,the pudding is served over hominy, waffles, toast or fried potatoes.  It can be topped with King Syrup or syrup.  Pie filling can also be made from it... a Pudding Pie.