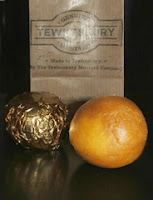 Mustard Balls were made from pounded mustard seeds, spices, and a binder such as wine, vinegar, honey or raisins. The balls were then dried in the sun or warm oven, and thus would "...keep better than mustard-seed or flour [ground mustard] at sea, and are easily dissolved." [Domestic, 1827] To use, thin pieces were sliced and soaked in vinegar, wine or verjuice. Tewkesbury was so famous for its mustard balls that Shakespeare mentioned it in a play. And cannon balls in the kitchen...

Ingredients. An Italian medieval recipe by Platina, 1465, combined pounded raisins with the mustard, cinnamon and cloves to form small balls, which were dried on a board. A century later, a Dutch cookbook author, Vorselman, mixed the mustard powder with vinegar and a little flour, but no raisins. By the 18th century, the mustard was mixed with canary wine and honey. [Salmon, 1711; Nott, 1723] Nott had a second recipe - for Mustard Cakes with cinnamon, canary and honey. An 1827 recipe had the widest range of ingredients: spices, turmeric, fenugreek, cummin, or rice flour, and vinegar & sugar or wine & honey. [Domestic, 1827]

Size. A 17th century travellor wrote: "Mustard off this place [Tewkesbury] is much spoken off, Made upp in balles as bigge as henns eggs, att 3d and 4d each, allthough a Farthing worth off the ordinary sort will give better content in my opinon, this beeing in sight and tast Much like the old dried thicke scurffe thatt sticks by the sides off a Mustard pott..."  [The Travels of Peter Mundy in Europe and Asia, 1608-1667]

Another quote referencing the size is from the testimony of Tutus Oates, who fabricated the 'Popish Plot' story to kill King Charles II, whose heir, James II was Catholic. "That the deponent [Oates] did on the 22nd of August, [1678] about nine o'clock, meet with Blundell ; and seeing him have a bag, asked him what he had and he replyed, Tewxbury mustard-balls, a notable biting sauce, and would furnish Westminster when be had enough of them. The deponent saith, that by Tewxbury mustard-balls, we are to understand, fire-balls." [Howell, 1816]

Cannon Ball. The grinding ball itself was also refered to as a Mustard Ball.  In Gloucester county "...few farm-houses were without a cannon ball and bowl." [Rudge, 1807] Cookbook authors suggested using a cannon ball or polished cannon ball to grind the mustard seed into powder.  The cook could use "...a Bowl with a Cannon-Bullet...or in a Mortar with a Pestle." [Nott, 1723] It could take "...an Hour in the Ceremony of grinding it in a wooden Bowl, and an Iron Cannon-Bullet, according to the old custom..." [Bradley, 1736]  In a recipe to make curd pudding "...grind it with a mustard ball in a bowl, or beat it in a marble mortar..." [Moxon, 1790] The seeds could be ground on a "...mustard quern, or a bowl with a cannon-bullet..." [May, 1660] A photo of a cannonball, mustard seeds and a quern, with a talk by Ivan Day, is available here.

Tewkesbury. He looks as if he had lived on Tewksbury mustard, was an old English proverb. "Tewksbury is a fair Market-town in this County, noted for the mustard-balls made there, and sent into other parts. This is spoken partly of such, who always have a sad, severe, and tetrick countenance. ... Partly of such as are snappish, captious, and prone to take exceptions." [Ray, 1737]  "...the Mustard Balls made here, so proper for clearing the Head.... 'Tis very biting, and therefore has occasion'd this Proverb for a sharp Fellow..."  [Magna, 1720]

Shakespeare wrote another reference to Tewkesbury mustard in his play Henry IV.  "Shakespeare speaking of one with a sad, severe countenance, uses the simile, [his wit's] As thick as Tewkesbury Mustard." [Dyde, 1790]   By 1772, a travel book stated "...there is no such [mustard] trade carried on at present." [Spencer, 1772]

*******
To make Mustard Balls 1723
Grind the Seed very fine, then make a Paste with Honey, and a little Canary; make it into Balls, and set them to dry in the Sun, or a gentle Oven, and keep them for use.

When you would use it, shave some of it very thin, put to it Vinegar and a little Salt.

To make Mustard in Cakes
Take four Ounces of Seamy, an Ounce of Cinnamon, beat them with Vinegar and Hony very fine, in a Mortar, make it into a Paste, and then into little Cakes, dry them in an Oven, or in the Sun, when you would use them, dissolve them in Vinegar, Verjuice, or Wine.
Nott, John. The Cooks and Confectioners Dictionary. 1723

Clean wash and rub in a cloth the best mustard-seed, and steep it in vinegar, or wine and salt, for a night; pound it in a mortar, and rub it through a sieve ; add any spices well pounded with turmeric, fenugreek, cummin, or fine rice flour, and make it into balls with sugar and vinegar, or wine and honey, and dry them in the sun: when wanted for use, dissolve them in warm wine or vinegar; by this method, the ingredients are completely incorporated. These balls keep better than mustard-seed or flour at sea, and are easily dissolved.

To prepare mustard-seed for sea-store, kiln-dry it, to destroy the germ, steep it in spirits, and dry it again, pack it with pepper, from which it can be easily sifted; or pack raisins or a few currants along with it. So prepared, it will keep any length of time in pure sugar.
Domestic Economy, and Cookery, for Rich and Poor, by a lady. London: 1827