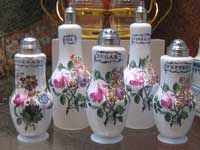 After 1720, the processing of the mustard seeds in a mill resulted in a fine flour - the flower of mustard - known commercially as Durham Mustard. Interesting story is below.  Later, when the processing moved to Leeds, the name Durham was retained. The mustard was sold as dry powder or as a "paste"...

In a previous post on Mustard Balls and Cannon Balls, HERE I wrote about mustard balls, sold commerically or homemade from period recipes, which kept better than mustard seeds or powder. It was time consuming to crush the mustard seeds at home in a mortar and pestle or with a cannon ball in a wooden bowl or on a quern. 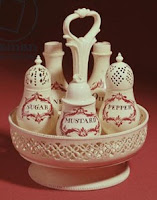 During the 18th century, china and silver casters were produced, often labeled for sugar, pepper,  and mustard.  As seen in the photo above, taken at Colonial Williamsburg, the front three casters with holes in the top are labeled Mustard (on left side) Sugar (center) and Pepper.   I assume that powdered mustard was in the caster with holes on the top and boxes, rather than the prepared (liquid) version, since liquids like oil and vinegar were in taller bottles with stoppers.  However, thus far I have been unable to find any references from the 18th century describing using the powder at the table.  The popular writer but not a food historian, Bill Bryson, wrongly states that there is no proof mustard was in the third caster in his newest book, At Home.  [see below]

Mustard pots with little spoons contained dry or prepared mustard [liquid], as did the mustard bottles in the 19th century cruet sets.  The cruet stand c1770, at right [Leeds Museums, Bridgeman Art Library website]  contains a creamware mustard pot with a lid, between the sugar and pepper.  "The patent mustard [prepared/paste] is by many preferred, and it is perhaps as cheap, being always ready; and if the pots are returned, three-pence is allowed for each." [Rundell, Maria Eliza Ketelby. A New System of Domestic Cookery. 1814]


Blind Casters for mustard had a flap over the bottom portion and the outside top could be pierced or not. The dry mustard was spooned out and mixed with vinegar.  A mustard castor from c1670 was described as a "...receptacle for serving dry unprepared mustard... the domed cover is either unpierced ('blind') or is blocked with an interior sleeve (now often missing)..."  [Newman, Harold.  An Illustrated Dictionary of Silverware.  London: 1987]  The flap under the pierced or unpierced covers would lift up as in one caster which had "...a removable sleeve that effectively blocked the pierced holes.  The cover is held in place by a bayonet joint formed of two lugs soldered to its rim and a notched rib on the upper body of the caster....Before the eighteenth century mustard was served as a dry powder, spooned from the caster and mixed with vinegar."  [English, Irish, & Scottish Silver at the Sterling and Francine Clark Art Institute] 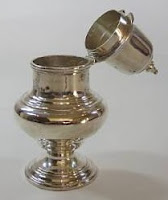 The photo on the left is labeled a William IV hinged blind caster,1834 with an indent for the spoon, on the Bonhams website.


Manufacture of Durham mustard. "Prior to 1720 there was no such luxury as mustard, in its present form, at our tables. At that time the seed was only coarsely pounded in a mortar, as coarsely separated from the integument, and in that rough state prepared for use. In the year I have mentioned, it occurred to an old woman of the name of Clements, resident at Durham, to grind the seed in a mill, and to pass the meal through the several processes which are resorted to in making flour from wheat. The secret she kept for many years to herself, and, in the period of her exclusive possession of it, supplied the principal parts of the kingdom, and in particular the metropolis,with this article; and George the First stamped it with fashion by his approval. Mrs. Clements as regularly twice a year travelled to London, and to the principal towns throughout England, for orders, as any tradesman's rider, of the present day; and the old lady contrived to pick up not only a decent pittance, but what was then thought a tolerable competence.— From this woman's residing at Durham, it acquired the name of Durham mustard." [Mechanics' Magazine and Journal. 1825]


York. "A Considerable quantity of mustard is sown in the neighbourhood of York, and fields of it may be met with in other parts of the Riding. It is prepared for use in the city of York, where there are mills and machinery for the purpose; and it is afterwards sold under the name of Durham mustard; being prepared after the manner there practised, or as was there first done."
[Agricultural Surveys: Yorkshire, North-Riding, 1800]


Adulteration of Mustard. "Genuine mustard, either in powder, or in the state of a paste ready for use, is perhaps rarely to be met with in the shops. The article sold under the name of genuine Durham mustard, is usually a mixture of mustard and common wheaten flour, with a portion of Cayenne pepper, and a large quantity of bay salt, made with water into a paste, ready for use. Some manufacturers adulterate their mustard with radish seed and pease flour. The salt and Cayenne pepper contribute materially to the keeping of ready-made mustard, sold in pots." [Accum, Friedrich. A Treatise on Adulterations of Food. London: 1820]


Prepared Mustard "...is best when nearly fresh made. It is prepared in a variety of ways;—plain with boiling water;—mild with milk or cream, or with the addition of a little sugar;—pungent with water in which garlic, horse-radish, &c. is boiled; it is also prepared with the flavoured vinegars, with Cayenne, with catsup, and even with spirits. The less made at a time the better; but it will keep for some days in a small jar closely stopt." [Johnstone, Christian. The Cook and Housewife's Manual, by Margaret Dods. Edinburgh: 1826]

Just correcting this book excerpt - "Traditional cruet stands came with two glass bottles with stoppers, for oil and vinegar, and three matching casters - that is, bottles with perforated tops for sprinkling (or casting) flavorings onto food.  Two of the casters contained salt and pepper, but what went into the third caster is unknown.  It is generally presumed to have been dried mustard, but that is really because no one can think of anything more likely.  'No satisfactory alternative has ever been suggested' is how the food historian Gerard Brett has put it.  In fact, there is no evidence to suggest that mustard was ever desired or utilized in such ready fashion by diners at any time in history."  [Bryson, Bill.  At Home: A Short History of Private Life. 2010 excerpt from Google Books]