Ann Augusta Forman Cooley (1810-1890) filled this composition book with recipes, possibly started as a school project. Raised a Quaker in NJ, then from 1828 to 1831 she attended Van Doren's Collegiate Institute for Young Ladies in Brooklyn Heights, perhaps the first woman's college. Click images to enlarge.

This post will be about the recipe manuscript but also a tribute to one of the first (if not the first) women's college. The worn book is 10.5 by 8 inches with 39 pages of recipes. Students were required to keep a daily journal, which may explain her name imprinted on the cover.

Here is the information I found about Ann and the school, thus far. It may be of interest to others. Let me know if you have seen an early school project to collect recipes like this.

Ann is her name on the book cover, but she was Anna in records. Her father John Emley Forman (1772-1867) was a Quaker, married Sydney Paul Rakestraw (1777-1814), lived in Alexandria, Hunterdon County NJ (sketch of his home) and was buried in the Friend's Cemetery. 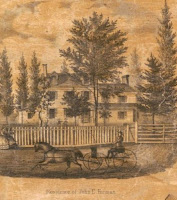 John Forman was “a just, upright, elegant old gentleman, a widower for over fifty years, of considerable fortune, and a power in his own community, a sort of gentleman farmer. He called himself a Quaker… married one of two Rakestraw sisters, beautiful women, and heiresses, and very accomplished.”
[Spottswood, Dandridge Anne. The Forman Genealogy. Cleveland: 1903]

The first part of the book is more carefully written in pen, than the later (written in pencil), like most recipe manuscripts.

New-Years Cake
2 Cups sugar - 1 of butter 1 of water - table spoon Carroway seed - teaspoon saleraetus mixed stiff - (Miss Schenck)
Margaret Schenck was a student from northern NJ. Two published recipes from Simmons 1796 and Leslie 1840 are near the end of this post.

Oysters of Green Corn
Grate 12 ears of sweet corn, take one half a pt of milk to rinse out the cobs, add six eggs, 3 tablespoonsful of flour & salt to the taste. Fry them in a buttered griddle, like pan-cakes -
They should be fried slowly & be throughly cooked.

The two students who definately contributed recipes didn't live near her, so perhaps the manuscript started at school as a project to do back home on vacation/break, thus all the 'Mrs.', and ofcourse continued into her adulthood. As typical with old recipe manuscripts, various ladies - family and friends - contributed, some were named.

Isaac van Doren wanted to create a place to give "Young Ladies the same advantages in acquiring an education that are enjoyed by the other sex in our Colleges." At their Kentucky college (and perhaps at Brooklyn) they could earn a diploma or honorary degree of M. P. L. (Mistress of Polite Literature), M. M. (Mistress of Music), and M. I. (Mistress of Instruction).


BROOKLYN COLLEGIATE INSTITUTE
FOR YOUNG LADIES.
(Brooklyn Heights, opposite the City of New-York.)
Isaac Van Doren, A.M. and J. Livingston Van Doren, A.M.Principals.
Assisted by Five Professors and Seven Instructresses.
This Institution was incorporated in April, 1829, with a capital of $30,000; the whole of which capital was expended in the lands and buildings the following year. It is designed to afford Young Ladies the same advantages in acquiring an education that are enjoyed by the other sex in our Colleges. Seventy-five pupils can be accommodated as boarders in the family of the principals. One hundred and seventyfive pupils have been connected with this Institution the past year.

The building is constructed of brick. Length, 75 feet. Breadth, including the portico and rear piazza, 78 feet. Height with the basement, 4 stories, and contains 40 rooms.
[The New York Annual Register 1831. also image]

The Troy Academy is listed with the famous Emma Hart Willard and her sister Almira Hart Lincoln Phelps (author and ran a large female institute here in Ellicott City MD).

Isaac van Doren (1773-1864) graduated from Princeton in 1793 and became a Presbyterian minister and educator. After 1825 he ran an academy in Newark for a short time, then relocated to Brooklyn Heights in 1828, to three new brick buildings on Hicks St. School began in May, costing $300 per session, additional for music lessons and other items. A four story building was built in May 1830. They were approached to create a school for ladies in Lexington, Ky and that school started by 1832 in the Lafayette Female Academy building (renamed when Lafayette visited in 1825) built 1817. The first pricipals were Luther Halsey Van Doren and Miss Adeline Van Doren. By 1838 the Ky school closed, the Brooklyn school continued under others to eventually become the Packer Collegiate Institute.

The Messrs Van Dorens were formerly Principals of the Female Institution in this town [Newark]."
[Newark Adv. Copied by The Boston Observer and Religious Intelligencer 1835]

Which was first college for ladies? The Brooklyn Collegiate Institute for Young Ladies was incorporated in 1829. The Kentucky state legislature chartered the college in 1835 but it closed after a few years. The first continuing college is Wesleyan College in Georgia since 1836; and the following year Mount Holyoke College in MA was founded. Links to two articles about early female colleges are below under 'more sources'.

New Year's Cake. Simmons 1796
Take a pint milk, and one quart yeast, put these together over night and let it lie in the sponge till morning, 5 pound sugar and 4 pound butter, dissolve these together, 6 eggs well beat, and carroway seed; put the whole together, and when light bake them in cakes, similar to breakfast biscuit, 20 minutes.
[Simmons, Amelia. American Cookery. ?Albany, 1796]

NEW-YEAR'S CAKE. Eliza Leslie 1836
Three pounds of four, sifted.
A pound and a half of powdered white sugar.
A pound of fresh butter.
A pint of milk with a small teaspoonful of pearl-ash melted in it.

Having sifted the flour, spread the sugar on the paste-board, a little at a time, and crush it to powder by rolling it with the rolling-pin. Then mix it with the flour. Cut up in the flour the butter and mix it well by rubbing it in with your hands. Add by degrees the milk. Then knead the dough very hard, till it no longer sticks to your hands. Cover it, set it away for an hour or two, and then knead it again in the same manner. You may repeat the kneading several times. Then cut it into pieces, roll out each piece into a sheet half an inch thick. Cut it into large flat cakes with a tin cutter. You may stamp each cake with a wooden print, by way of ornamenting the surface.

Sprinkle with flour some large flat tin or iron pans, lay the cakes in them and bake them of a pale brown, in an oven of equal heat throughout.
These cakes require more and harder kneading than any others, therefore it is best to have them kneaded by a man, or a very strong woman.
They are greatly improved by the addition of some carraway seeds worked into the dough.
[Leslie, Eliza. Seventy-five receipts for pastry, cakes and sweetmeats. By Miss Leslie, of Philadelphia. Boston:1836]

Engraved view of the Brooklyn Collegiate Institute for Young Ladies from The Eagle and Brooklyn 1893 Library of Congress.

English Grammar, and Chart for Parsing the English Language, [book] prepared for and dedicated to the young ladies of the Brooklyn and Lexington Collegiate Institutes by J. Livingston Van Doren [1801-1858]. NY: 1832 HERE