This 1865 article described the modern options to get water from a small well.
September talks are now up, and the first week's talks are below. As usual, there are some interesting talks this month, including a Medieval Feast Symposium.


"How many young persons know what a pump is, and are unacquainted with the manner by which water is raised by it from the earth. In early times wells were universally used, and water was drawn from them in buckets by the hand. 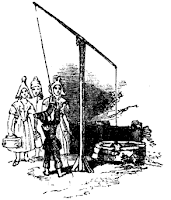 The first improvement upon this was by means of a lever, as here represented, by which the bucket is fastened to one end of the lever by a cord, while the person wishing to raise the water hauls down the other end; but, as knowledge advanced, a better method of raising water was discovered. 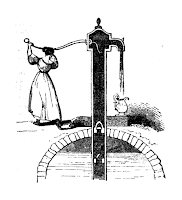 This better method is performed by the agency of a machine called a pump, of which the larger engraving is a section. It is a hollow cylinder, with a sort of bucket, as it is called by the plumber, in the upper part, to which a rod is attached, and another towards the bottom, which is fixed. These buckets are called more properly pistons, and the rod above the upper one the piston rod. The upper piston is called the sucker or sucking piston, Both these pistons are hollow, and each has a valve or lid at the top; when shut, these valves fit close to the hollow of the piston, so as perfectly to shut out the air; but they are fixed on hinges which move very easily, and give way to a very light pressure: both open upwards towards the top of the pump. The lower piston or plug is, as before stated, fixed, while the upper plug moves up and down. When the barrel of the pump is empty, the space between the buckets is filled with air; and when the upper bucket is forced down by the rod, the air between the buckets will press down the lower valve of the bucket and shut it; at the same time its upper pressure will open the valve of the upper bucket, through which a portion of the air will escape. When this bucket begins to ascend, the valve will fall and close the piston, and prevent the air entering the pump from above. As it ascends, an empty space or vacuum will be left in the pump, which the external air will endeavour to rush in to fill. As the lower valve also opens upwards, it will yield to the pressure from below. The pressure of the air, therefore, will force the water through the plug into the barrel of the pump: at the next descent of the sucker the water will pass through its valve into the upper chamber, and the next motion upwards will carry it through the spout.

The Forcing Pump consists of two parts or barrels, - one similar to the common pump, and the other rising by its side and connected to it near the lower valve. The water is first raised in the former part in the same way as in the common pump, excepting that the piston has no opening valve, but is solid, and the air is forced out through the side valve into the adjoining tube or barrel. Through this valve the water is also forced, and the pressure of the descending piston makes it rise and enter the ascending tube and issue out at the top. The length of the tube may be increased at pleasure."
Martin, William. The Holiday Book: with Numerous Illustrations ... 2d ed. London: 1865