Trying to bite into an apple. on a string. revolving. with candles. what could go wrong?? HERE

Another tricky game - grabbing for raisens in a fire HERE

In Ireland "...a gold ring was concealed somewhere in the dish of potatoes and cabbage." HERE 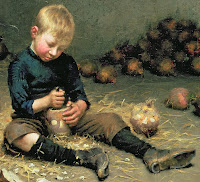 Turnips were used instead of pumpkins to make 'turnip lanterns' HERE 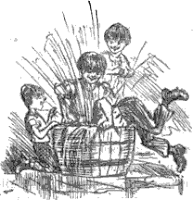 "juveniles, by turns, duck their heads with the view of catching an apple." HERE

In mid1800s, Halloween was celebrated "roughly" - parts of a wagon were put in different trees, gates taken off hinges, wooden steps removed, taking wagons apart and rebuilt in a stable, and other extreme 'tricks'. HERE 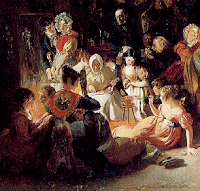 Robert Burn's poem Halloween had several 'spells' for young folks to do on All Saints eve to foretell their future. HERE

The sketch shows a group a-souling for Soul or Soule cakes which were given out on All Hallows Eve (the night before All Saints Day, Nov 1) or on All Souls Day (Nov 2) was an old tradition by 1511.HERE

In Mexico, sugar skulls were sold in market stalls (1908 image). Other items for the family alters include candles, Pan de Muerto (a sweet yeast bread), mole and other foods.HERE

Halloween posts (past and future) HERE

Gothic Food: Examples of Consumption and the Cruelty of its Consequences in Gothic Literature Dr. Alessandra Pino. 2020 TAPE HERE

Oct 28 Thur 3-4:30 Cabarets of Death. “From 1892 until 1954, three cabaret-restaurants in Paris’ Montmartre district enraptured tourists with their grotesque portrayals of death in the afterworlds of Hell, Heaven, and Nothingness. Each had specialized cuisines and morbid visual display…” Joanna Ebenstein. The Viktor Wynd Museum & The Last Tuesday Society £5.82 – £11.04 HERE FULL

Nv 1 Mon 4-5:30 The history of Halloween “from its murky pagan past and supernatural associations.” Ronald Hutton. The Viktor Wynd Museum & The Last Tuesday Society. £11.04 HERE