An ice cream cone factory in 1917 Oklahoma depicts making the cones, and other images show various US patents. The metal molds were heated, thick batter poured in, then the top mold was lowered into the bottom.
This is a test email since the blog email server was switched. Click images to enlarge. 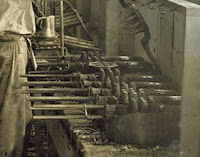 US Patent of Antonio Valvona for cup or dish shapes 1902

“… make cups or dishes of any preferred shape or design from dough or paste in a fluid state that is preferably composed of the same materials as are employed in the manufacture of biscuits, and when baked the said cups or dishes may be filled with ice-cream, which can then be sold by the venders of ice-cream in public thoroughfares or other places. In order to produce said cups or dishes, I provide a combined metallic mold and oven consisting of two plate…
The biscuit dough or paste, which is of the consistency of a thick fluid, is poured from a can, that may be provided with one or more spouts…. The [heated] plates are then closed, and the cup or dish is formed by the dough being pressed into the space between the core and the mold. It is then baked by the apparatus being placed over a gas or other fire...”
#701,776 Apparatus for baking biscuit-cups for ice-cream. Antonio Valvona of Manchester, England. Filed July 12, 1901. Patented June 3, 1902 HERE

“This invention relates to the manufacture of hollow shells of pastry of suitable forms for the reception of ices or other materials or articles used in pastry, and consists in an apparatus whereby to rapidly mold and bake the material used in the manufacture of such articles… Figure 1 is a perspective view showing one form in which the apparatus may be used, one set of the sectional molds open in the position they would occupy after the shells had been baked and withdrawn therefrom… the batter or paste sufficiently liquid to adhere to the cone when dipped therein. … series of molds, each corresponding in general form to the form of the cone, but a cavity in each section of the mold is larger than the cone to the extent required to produce the shell of required thickness…”
#1,063,981 Apparatus for and method of making pastry shells. Edward H Lanier of Cincinnati, Ohio. Filed March 21, 1908. Patented June 10, 1913. HERE

Closeup of cone top into base 1916

A History of Ice Cream. A Recipe from 1789. Parmasan Cheese by Frederick Nutt. Tasting History with Max Miller TAPE HERE