Peat in Ireland for cooking, heating 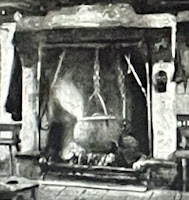 Much manual labor was involved to get peat from a bog to the hearth. Slabs (like long bricks) were/are sliced off the bank by a special tool, then dried, turned, and dried until all surfaces were hardened and able to burn. Cooking over peat is shown in the picture An Irish farm kitchen with its open grate for peat. [1906]

Slanes - Irish, American, German [1907]. Cutting with a slane is shown in the 3 minute tape HERE 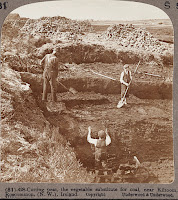 Cutting and carting turf at a bog near Kiltoom, County Roscommon [c1903 LC] turf barrow and donkey with 2 baskets

Drying the peat - has to be turned to dry all sides, one stage its arranged in small piles [1880 LC]

Baskets to carry peat to their cottage [1903 LC] 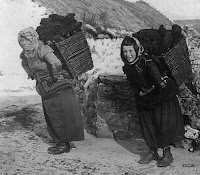 In Mull, Scotland with little coal “… the best part of the year is wasted in the operations of cutting and drying peat.” [1800]

The Story of Turf Cutting in Ireland . Dr. John Kerr. Great documentary, first 22 of 45 min. Hand cutting, then at 15 min 1970s turf machines and 1950 peat cooking stove; shows the top layer being used as the base of a thatched roof. TAPE HERE

Se 18 Sat 6 AM A Land Drained, A Nation Fed: The Fens since 1600. “Gravity drainage in the 17th century was succeeded by windmills in the 18th, steam in the 19th and diesel and electric power in the 20th.” Open Cambridge UK HERE TAPE HERE

Peat, sometimes called turf, but improperly, is a fuel much employed in many countries; although in England, from the abundance of coal, a much superior substance, it is little esteemed. Nevertheless, it is the only fuel which the poorer classes can procure in parts of the north and west of Scotland, and a great part of Ireland. In many parts of Holland there is no other fuel; and in several districts of France, Germany, and other kingdoms of Europe, where coal and wood are scarce, the poorer inhabitants burn nothing.

Peat, as a fuel, being loose and spongy in its texture, compared with more solid kinds, is not so fit to be employed for the production of strong heat, as it is too bulky, and burns away too fast: but, when we desire to keep up a long - continued and extremely gentle heat, we can scarcely use anything better than peat. There is a very great difference in the quality of this fuel. Some of it is very light and spongy, of a brown colour, appearing to consist of a mass of the fibrous roots of plants and dead leaves, & c . This kind burns readily, but consumes rapidly. The best peat is compact and heavy, of a brownish black colour, with scarcely any vestiges of its vegetable origin remaining. This last is an excellent fuel, gives a steady heat, though mild and gentle, with a brilliant white flame, and does not require so much attention as wood; but, when lighted, preserves the fire a long time, and, when red - hot, bears to be moved about: still it consumes much faster than coal.

The smoke of peat is copious and penetrating, and affects the eyes like the smoke of wood. It gives an odour disagreeable to those who are not accustomed to it, owing to the pyroligneous acid which is disengage As this smoke occupies the upper part of the cottages where chiefly it is burned, it is less felt by sitting down. It likewise imparts a peculiar empyreumatic smell to every thing it comes in contact with, which adheres with great obstinacy; but this smoke is well adapted for curing some kinds of meat and fish, imparting to them a peculiar flavour, much esteemed.

The best and densest peat is generally found at the bottom of the peat mosses, being older, and subjected to most pressure. In farm houses and cottages, peat is usually burnt upon the hearth, which cannot be done with coal; and when it is dry, good, and properly disposed or built up, it blazes and makes a cheerful fire, which, from its low situation on the ground, diffuses a great deal of warmth. The best kind burns very well in a grate, but the quantity of ashes it makes renders it inconvenient in this way; whereas, on the hearth, the ashes, instead of being inconvenient, are extremely useful to poor people in various processes of their cookery. Hot peat ashes are excellent for roasting fish, eggs, & c.; and likewise for stewing, and any kind of cookery that requires a mild heat. In this respect it approaches to charcoal.


SOURCES
1800 Jameson, Robert. Mineralogy of the Scottish Isles… Dissertations upon Peat and Kelp. v1 Edinburgh: 1800
1812 Richardson, W. Essay on the Peat Bogs of Ireland… modes of reclaiming them, directed by a late act with some strictures on the measures adopted for carrying this act into execution… London: 1812
1844 Webster, Thomas. An Encyclopædia of Domestic Economy. London: 1844 In the chapter on “Kinds of Fuel: wood, charcoal, coal, coke, peat, prepared fuel, liquid fuel and coal gas.
1866 Johnson, Samuel Wm. Peat and Its Uses: As Fertilizer and Fuel. Many pics. NY: 1866
1867 Leavitt, Thomas. Peat as an article of fuel… Boston: 1867 “Leavitt’s peat condensing and moulding mill.”
1868 Marshall, Emma. The Little Peat-cutters. London: 1868
1906 “An Irish farm kitchen with its open grate for peat” in Dodge, Richard. Dodge's Elementary Geography. Chicago: 1906
1907 Bjorling, Philip. Peat: its use and manufacture… with 60 illus. London: 1907