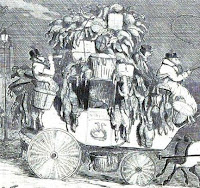 This year, when most of us will not be having a large turkey or many family members, I give this post to the turkey of Christmas past. And in the past I have written several times about turkeys. The most fascinating aspect, I think, is how all those turkeys got to market.


In Britain turkeys could displace passengers on the Coaches. 1836

"There is little exaggeration in the accompanying picture of a Lynn or Bury coach... with its freight of turkeys... [were] transmitted from that city to London, between a Saturday morning and the night of Sunday, in the December of 1793;—which statement gives the number as one thousand seven hundred, the weight as nine tons, two cwt., and two lbs., and the value as £680... it is not unusual with the proprietors, at this season, to refuse inside passengers of the human species, in favour of these... [turkeys], who “pay better..." [Hervey] More in post HERE

This 1838 take on the common situation - "Fancy Turkey Coach" 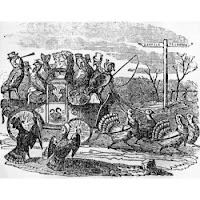 “Mr. Charlton said that it reminded him of once seeing the Norfolk coach, so loaded with turkeys, that it ought to have been called the turkey stage. There was scarcely any thing to be seen but turkeys; so piled was the outside of the coach, and so crammed the inside, that they wanted nothing in the world but a turkey for a coachman, and another for a guard, to render the thing quite complete. “I should hardly have been surprised,” added he, “to see a turkey or two, running after the coach, labelled round the neck ‘for Leadenhall Market,' and screaming out that their places had been booked three days before.” [Goodrich]

The turkeys could walk to market.

Jacob Engelbrecht in Frederick MD noted in his 1826 diary: "“A drove of turkeys amounting to nearly four hundred from Westmoreland County, Pennsylvania just now passed the door on their way to Washington City. [DC] They go at the rate of 8 miles per day. Saturday February 4th 1826 8 o'clock AM" More in post HERE

Charles Dickens wrote before Christmas of 1851: "THE TURKEY-DROVER has also a very busy time of it just now…” At times the turkeys were coaxed: “a farmer and his wife conducting a large brood of turkeys to the market, the wife going before with a few seeds of Indian corn, which she occasionally drops to entice them, and the husband following behind with a wand in each hand to coerce them.” [Harrison]

Turkeys were able to run, as seen in this image from a turkey farm when they were called to supper...

It would take time in the morning to get the turkeys out of the trees.

“It is said that the turkey drover would have to watch his flock when night approached, or the birds would fly to the nearest tree as soon as it became roosting time . They would drive during the day peacefully enough, but the natural instincts would send them to the tree tops when twilight came.” [Shaw]