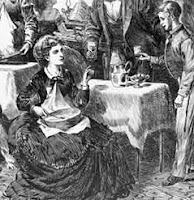 George Washington personally wrote the following recipe? "...fold slowly into mixture... Taste frequently." No. Another false claim is that a travellor wrote in 1796 that egg nog was served at breakfast in City Tavern, Phila. No, in Maryland. Thanks to the internet, WAY too many bloggers and book authors are blindly passing these modern tales on.

Let's clear this up quickly. It's wrong. Not a recipe of that period. And not in Washington's collected writings. Mary Thompson of Mount Vernon has said, repeatedly, they had no egg nog recipe from him. In fact, the furtherest I traced it was... 1989 from The Old Farmer's Almanac by a writer in Hawaii. Or possibly from Harnett T Kane's Southern Christmas Book, 1958. Since only a 'snippet view' of the Almanac and none for Kane are on Google books, I didn't want to post until I saw the whole book. But after waiting several years already, when I do get back to the Library of Congress, it will not be to chase down these obviously false claims. So I am posting now.

Since I started this draft years ago, the claim that the recipe was written by George Washington has been replaced on The Old Farmer's Almanac website, which was interesting, because it was in their printed Almanac in the 1980s: "Courtesy of Dick O'Donnell, Honolulu, Hawaii." I had sent him an email (he has moved from Hawaii) but no response where he found the recipe. 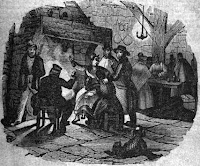 In a February 1796 letter Weld wrote about his trip from Baltimore to Philadelphia. At the end of January an intense cold snap froze the Susquehanna and Delaware rivers, but five days later he started his trip. After describing the egg nog, he details their crossing the icy Susquehanna River. I found no mention of City Tavern when he arrived in Phila. The following happened while still in Maryland, just north of Baltimore and below the Susquehanna -

Several travellers had stopped at the same house that I did the first night I was on the road, and we all breakfasted together preparatory to setting out the next morning. The American travellers, before they pursued their journey, took a hearty draught each, according to custom, of egg-nog, a mixture composed of new milk, eggs, rum, and sugar, beat up together; …

Egg nog for Christmas, New Year's Eve, Twelfth Night. It was a Southern tradition to set a tub of egg nog on the porch for 12 days for visitors - from Christmas until Twelfth-night, as related in an 1869 story. HERE