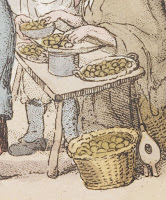 In winter a pan or container of burning charcoal roasted apples or chestnuts on a tin plate as shown in 1820 by Rowlandson and described in Craig's Cries of London 1804.  Sixty years later "Roasted apples used to be vended in the streets... but it is a trade which has now almost entirely disappeared." 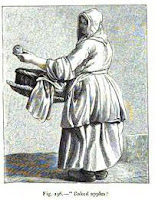 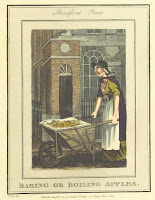 1804
"Baking or boiling apples are cried in the streets of the metropolis from their earliest appearance in summer throughout the whole winter. Prodigious quantities of apples are brought to the London markets, where they are sold by the hundred to the criers, who retail them about the streets in pennyworths, or at so much per dozen according to their quality. In winter, the barrow woman usually stations herself at the corner of a street, and is supplied with a pan of lighted charcoal, over which, on a plate of tin, she roasts a part of her stock, and disposes of her hot apples to the labouring men and shivering boys who pass her barrow."
Craig, William Marshall.  Cries of London  1804  British Library

1861
"Roasted apples used to be vended in the streets, and often along with roasted chestnuts, but it is a trade which has now almost entirely disappeared, and its disappearance is attributed to the prevalence of potato cans.
I had the following account from a woman, apparently between sixty and seventy, though she said she was only about fifty. What she was in her youth, she said, she neither knew nor cared. At any rate she was unwilling to converse about it. I found her statement as to chestnuts corroborated:—

"The trade's nothing to what it was, sir," she said. "Why when the hackney coaches was in the streets, I've often sold 2s. worth of a night at a time, for a relish, to the hackneymen that was waiting their turn over their beer. Six and eight a penny was enough then; now people must have sixteen; though I pays 3s. a peck, and to get them at that's a favour. I could make my good 12s. a week on roasted chestnuts and apples, and as much on other things in them days, but I 'm half-starved now. There'll never be such times again. People didn't want to cut one another's throats in the street business then. O, I don't know anything about how long ago, or what year—years is nothing to me —but I only know that it was so. I got a penny a piece then for my roasted apples, and a halfpenny for sugar to them. I could live then. Roasted apples was reckoned good for the tooth-ache in them days, but, people change so, they aren't now. I don't know what I make now in chestnuts and apples, which is all I sells—perhaps 5s. a week. My rent is 3d. a week. I lives on a bit of fish, or whatever I can get, and that's all about it."
Mayhew, Henry.  London Labour and the London Poor, Volume 1. 1861