During strawberry season the demand "is enormous" and in an 1857 article they sold for 12 or 15 cents a quart so "even the moderately rich buy berries daily." Maryland Strawberry Parties 1831-2 and Jane Austen

Baltimore and "Maryland Strawberry Parties" in 1831 and 1932 were described by two Englishmen.  The evening activities included music, dancing, strolling groups of young singles and "strawberries and cream, ices, pine apples, and champagne, were served up."  Both mentioned the fire-fly... some ladies wore them in their hair, and some boys attached them to a bullfrog. 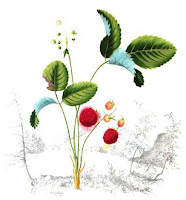 The environs of Baltimore are exceedingly pretty: almost every eminence is crowned with a country house, surrounded by gardens and pleasure grounds richly wooded, and laid out to the best advantage, so as generally to afford a peep through the trees at some part of the Patapsco, or the Chesapeake. They are admirably adapted for a fete champetre, or a strawberry party, as it is called at Baltimore. I had the honour of an invitation to the only one that was given during my stay in that city. The company assembled about six o'clock. Quadrilles and waltzes were kept up with great spirit, first on the lawn, and then in the house till about eleven. In the mean time strawberries and cream, ices, pine apples, and champagne, were served up in the greatest profusion.

At Baltimore, I first saw the fire-fly. They begin to appear about sunset, after which they are sparkling in all directions. In some places ladies will wear them in their hair, and the effect is said to be very brilliant. Mischievous boys will sometimes catch a bull-frog, and fasten them all over him. They show to great advantage, while the poor frog, who cannot understand the "new lights" that are breaking upon him, affords amusement to his tormentors by hopping about in a state of desperation.
Vigne, Godfrey.  Six Months in America [1831].  Phila: 1833

A few hours before sunset, the different visitors generally assembled, by far the greater number consisting of the young and unmarried of both sexes. under the shade of the trees, tables were covered with the delicacies of the season,—among which the delicious fruit, from which these Strawberry Parties took their name, was ordinarily seen in the greatest profusion, with its appropriate concomitants of cream and champaigne. Many an enchanting spectacle of natural beauty and human contentment and pleasure, have I observed spread before me, while sitting in the portico of one of these rural retreats [country houses], as the sun sunk slowly to its setting. ...the Maryland Strawberry Parties.

Later comes the brief but beautiful twilight, with the wailing cry of the whip-poor-will, the flight of the night-hawk, and above all, myriads of fire-flies filling the air with sparks, dancing in the deep shade, or streaming with their intermittent and gentle light among the groups, as they stroll in the open air, or sit in the porticoes.
Latrobe, Charles Joseph.  The Rambler in North America: 1832-1833, Vol. 1.  London: 1835 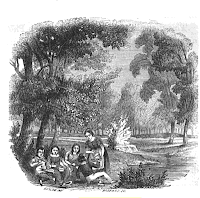 “Mary Erskine came out, bringing mugs and baskets to put the strawberries in. There were four mugs made of tin; such as were there called dippers. … The strawberries were not only very abundant, but also very large and ripe. Mary Erskine said that they might all eat ten, but no more. All that they got, except ten, they must put into their dippers, until the dippers were full. She herself went busily at work, finding strawberries and putting them into the dippers of the children, sometimes into one and sometimes into another. In a short time the dippers were full.

The whole party then went back to the brook and sat down upon the great flat stone, with their dippers before them. Mary Erskine then brought out one of her baskets, and lifting up the cover, she took out five saucers and five spoons. “There,” said she, “I brought you some saucers and spoons to eat your strawberries with. Now take up the bunches from your dippers, and pull off the strawberries from the stems, and put them in the saucers.”

While the children were all busily engaged in doing this, Mary Erskine opened the other basket, and took out a pitcher of very rich looking cream. The sight of this treasure of course awakened in all the party the utmost enthusiasm and delight. They went on hulling their strawberries very industriously, and were soon ready, one after another, to have the cream poured over them, which Mary Erskine proceeded to do, giving to each one of the children a very abundant supply.”
Abbott, Jacob. Mary Erskine. A Franconia story. NY: 1850

1857
The recurrence of the strawberry season is now an event in the annual history of almost everybody. After a fast of some months from such luxuries, the universal nation seem to rage for strawberries, and the consumption, while good berries can be had for twelve or fifteen cents per quart, is enormous. Even the moderately rich buy berries daily in our market; and to all the rich, strawberries are an indispensable article of diet. While they last, Strawberry Parties, Strawberry Festivals and Fairs, are all the rage.

1857
“a table set with fruit-dishes of nice strawberries, pitchers of sighing [sic] cream and baskets of scalloped plum cakes, with a little bowl of sugar at each plate.”
Talmon, Thrace.  Stories for the Strawberry Party.  Boston: 1857