This cake was named for a Dickens character in an 1839 novel and the ensuing 1870s dress style.  The earliest recipe, in 1877, had four layers - chocolate, white (egg whites), rose (cochineal), and yellow (egg yolks) - with frosting.  The new cake had appeared in several state fair lists in 1876.


Later Dolly Varden Cakes had three layers of colors—white, red, chocolate, but some had two layers of light and dark (with raisins, currents, molasses).

Eventually it morphed into a Doll Cake (plastic doll stuck in middle of a cake with frosting as a dress).  Wilton Co. makes a Wonder Mold for doll cakes (below), which in Australia is sold as a Dolly Varden cake. 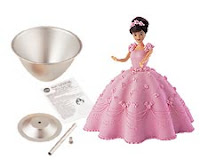 Charles Dickens's 1839 novel Barnaby Rudge, set during the 1780s riots in London, included a character dressed in colorful ‘Watteau style’ outfits.  In the  early 1870s a dress style became popular which some felt was over-the-top, and not for "persons over middle age":

“We think that the immense bouquets, tropical leaves, birds and birds’ nests, swinging cupids, and love-lorn shepherdesses, which adorn these dresses, are in the very worst taste; they look as if the bed-room curtains had been made to do double duty. The true “ Dolly Varden“ dress is really picturesque and very becoming, except to persons over middle age… “
Peterson’s Magazine.  July 1872. 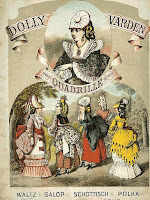 The following recipe was interesting in color and flavors, as were most of the older layer cakes I have made. Try one! I neglected to write down the temp and time for this recipe...it was six or more years ago.  Other posts on cakes HERE

My mom made the doll cake a couple times.  She just stuck a plastic doll in the center hole of an angelfood cake and used her regular butter, powdered sugar, &c, icing to form the dress.

Most of the cakes included in the "layer cake" entry in The Oxford Companion to Sugar and Sweets used one line out of all my research (a challenge).  "An 1877 version of Dolly Varden Cake called for four layers of chocolate, white, rose, and yellow, although later recipes generally alternated only light and dark layers."  There is a more detailed Dolly Varden Cake entry in the encyclopedia.  anyway... back to the recipe...

Bake the same quantity of the receipt, using the yolks of the eggs, coloring one-half with one teacup of grated chocolate; bake in jelly tins; frost each layer with very thin frosting taking care not to get too much sugar; put together chocolate, whites, rose, and yellows. Very handsome and very good. Try it.
Melrose Household Treasure.  Melrose [Mass.]: 1877

Interestingly, the recipe immediately following this was labeled a “Dickens Cake”- layers of dark and light with jelly in-between.

The painting is ‘Dolly Varden’  by William Powell Frith, 1842.