By the 1840s  "cellars under houses... are coming to be preferred for the purpose of keeping milk to either milk-houses, milk-vaults, or even spring-houses."  In Delaware "dairymen charged higher price for 'cellar butter.'"  The picture is from 1873 North Carolina.

The Milk Cellar in Delaware 1843
“… butter made in a cellar, was far preferable to that made in a spring-house, its great recommendation being, in keeping sweet and good much longer, and retaining its fine flavour and colour to the last, which spring-house, butter would not do.”  Dairymen charged higher price for “cellar butter”

Of course, it is readily admitted that much depends on the mode that is adopted in the management of the dairy, commencing with the breed and feed of the cows, and ending with the manipulations of the butter; but the idea is gaining ground, that the best butter is to be made in a cellar, all other circumstances being equal: a remarkable revolution in public opinion, truly.


However if the “cellar is dug in a damp soil, or has been most injudiciously opened to the well, the evaporation from which fills the room with constant moisture, which may be found adhering to the walls, the ceiling and the wood-work, the shelves, and particularly the inside of the door, causing a damp and clammy feel, and a nauseous, mouldy smell, which the butter imbibes, to its lasting injury: indeed no good butter can be made in such places.”


“ it is no longer thought necessary to dig the cellar very deep, or to arch it over with stone or brick, with an air passage through it for ventilation—a vault, as it is more properly then termed: it is found sufficient, if the cellar be sunk a few feet below the surface of the earth, with a wide and shallow window on each side, the bottom of it level with the ground outside; well protected with a wire guard to keep out vermin, large flies, &c., and provided with a close glazed sash, which can be opened and closed at pleasure, by lifting it up to the ceiling, which ought to be no higher than the top of the windows; so that the air of the cellar can be ventilated by opening the windows of the two opposite sides, according to the way the wind sets at the time, shutting them quickly when necessary; for in cold, windy, or damp weather, the sooner the windows are again closed, the better. Indeed, to the management of the cellar in this particular, much of the success of dairying is to be attributed; cold and damp air being unfriendly to the secretion of cream, and its proper and entire separation from the milk. Hence, therefore, it is a bad practice to set the pans on the brick floor of the cellar; they ought always to be placed around on shelves, about three feet in height, and these, after being well washed with hot water, should be wiped quite dry, that no mouldy evaporation might take place to spoil the butter.”


“The air near the floor of a dairy is always impure, being loaded with acid vapours and putrid exhalations, the density of which confines it to the lowest part of the room; hence it is, that the doors of some dairies are made with lattice work, that the air near the floor, as well as that near the ceiling, might be ventilated at the same time; these lattices being furnished with sliding panels, to be kept close in bad weather. The milk cellar ought always to have a northern aspect, and be well shaded by trees, not growing too near the windows, so as to impede a dry current of air, or to create a moist atmosphere; this consideration being of more importance than would readily be imagined. Cellars thus constructed and carefully attended, will, no doubt, supercede the use of spring-houses generally, before many years have passed away; by which the business of the dairy will be rendered more agreeable, less laborious, and far less inimical to the health of those, particularly of females, whose occupation it is to attend to its never ceasing duties.”
The Farmers’ Cabinet, and American Herd-Book.  Phila: June 1843


1848 "Of late, cellars under houses, properly arranged, are coming to be preferred for the purpose of keeping milk to either milk-houses, milk-vaults, or even spring-houses. Among the advantages claimed for cellars are, being at hand everywhere at a small cost; and keeping drier, thus less disposing to must."

The Farmer's Encyclopædia, by Cuthbert William Johnson adapted for US by Gouverneur Emerson.  Phila: 1848 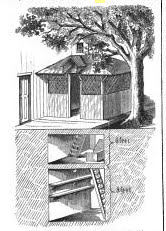 "a milk-cellar…in North Carolina… was built in connection with a very pleasant and comfortable although an old mansion. The entrance to the cellar was from the porch which ran around the house, and adjoining the rear or kitchen door. A handsome shade-tree and a grape-vine protected the entrance, which had lattice-work on three sides, with a door, also partly of lattice-work, in the front. A few steps led down into a very cool apartment about six feet below the ground, well lighted from a glazed cupola in the roof, and built of brick, and whitewashed. It was circular, with a raised hatchway in the center, which could be closed up tightly or opened at will. A trap-door at one side led to a stairway to a lower cellar, which was the milk-room. The upper apartment was used as a store-room for kitchen utensils, churn, and other similar articles. The lower cellar, when the hatchway was open, was well lighted. It was also of brick, and cleanly whitewashed. The floor was of brick, not cemented together. Shelves ran around this cellar at a convenient height on which were kept milk, cream, butter, and other things proper to a milk-room. The cellar was circular, about 10 feet in diameter, and in all about 14 feet deep. The lower apartment was ceiled over with wooden beams and a tight floor. The cost of the whole would not be beyond the means of almost every farmer, and its peculiar construction adapts it excellently to the needs of Southern farmers and planters on account of the extra coolness gained by the division into two apartments."
American Agriculturist  July, 1873