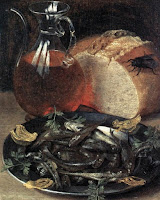 
Punkhas or punkas or punkahs were the showiest way to keep diners cool and flies away.  The first photo is Tallwood House in VA, the second is Melrose in Nachez MS, both from Library of Congress. 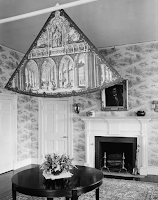 1790 "To chase away the flies, and occasion a freer circulation of the air, many houses [in India] have a large fan hanging from the ceiling over the eating table, of a square form, and balanced on an axle fitted to the upper part of it. A servant, standing at one end of the room, puts it in motion by means of a cord which is fastened to it, in the same manner as he would ring a bell."  [Voyage, 1790]  Image c1824 - 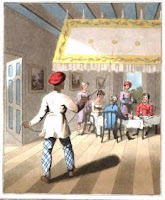 1811 "The punkha is a large frame of wood covered with painted canvas, and suspended by ropes from the top of the room. It is generally hung over the dining table, and intended to answer the end of a fan. A servant stands on the side of the room and holds a rope fastened to the middle of it, and keeps drawing the punkha to him, and then letting it go again. In this manner, the air being agitated, the place under the punkha becomes very cool. [Ward, 1811]

1845 "In Hindostan a sort of ventilation is produced by the use of the Punka, which is a large fan suspended from the ceiling; to this a rope is attached and passed through an aperture in the wall into the verandah, where a man is placed who keeps constantly waving it by pulling the rope. By this the largest rooms, and some churches, have the air put into constant motion, to the great comfort of all present."  [Webster, 1845] 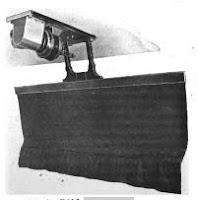 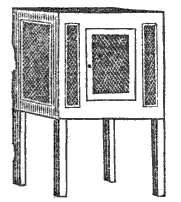 
“a term expressive of that corruption of fleshmeat, or any animal food, which is occasioned by flies depositing their eggs on its surface, where they are subsequently bred into maggots... The easiest method of preventing such damage, is that of suspending the joints in a meat-safe, or a wooden frame surrounded by close wires, so that the flies may be completely excluded, and the air still allowed to perflate the whole apparatus. Those families which are not provided with this useful domestic contrivance, may occasionally preserve joints of meat for several days, even in summer, by wrapping them in clean linen cloths, previously moistened with good white-wine vinegar, placing them in an earthen pan, and changing the cloth once or twice a day in warm weather.” [Willich, 1803]

"A large cream jug stands by the netted window; it is covered with a wire fly-cover—not kept closed from the air." [New, 1870]

“flies will not pass through the meshes of a net, even though those meshes are more than an inch in diameter.” [Howitt, 1854]


All meat should be carefully examined, and wiped with a dry cloth as soon as it comes in; and if flies have blown upon it, the part must be cut off. In the country, where meat is often carried a great distance, it should be well covered up with a cloth, over which fresh cabbage-leaves would keep it cool.  The fly may in some measure be prevented by dusting, upon the parts most likely to be attacked, pepper and ginger mixed, after wiping, which should never be omitted; but a more easy and effectual mode is to exclude the fly by using a wire meat-safe, or to cover the joints with a long loose gauze or thin cloth, and hang them up from the ceiling of an airy chamber.”  [Rundell, 1851]


FLY-TRAPs  - the downsides of window blinds or sashes, curtains, chemicals
"The means of destroying flies are few… Arsenical and other mineral mixtures expose you to the risk of poisoning, if not yourself and friends, at least your favourite cat. Canvas or wire-work blinds fitted to the open window make you feel as if you were a joint in a meat-safe. Mosquito curtains, adapted to the same, give an apartment the air of a lying in room or a private asylum. Chloride of lime will send away flies, and even mice; but it ruins your pictures and your lungs. Crushed laurel-leaves, tobacco-smoke, and camphor, impregnating an atmosphere, are as noxious to man as they are to man's insect enemies." [British, 1862] 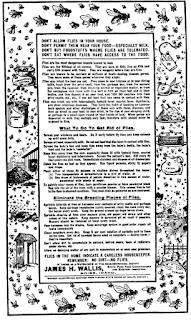 "Bottles hung about with sugar and vinegar, or beer, will attract them; or fly-water put into little shells placed about the room, but out of the reach of children. Or, what is much safer, is a paper now sold at the chemist’s covered with an adhesive substance, which may be laid on the glass or near it. A good preventive is to hang gauze blinds before all open windows.
0r:—Boil 3 or 4 leeks in a pint of water, then with a gilding-brush wash over your glasses and frames with the liquid, and the flies will not go near the articles so washed. This may be used without apprehension, as it will not do the least injury to the frames." [Rundell, 1851]

Although I have not read the article by Dana Byrd, her website The Punka Project
lists all the existing punkas she has found, and it sounds like an interesting article: “Motive Power: Fans, Punkahs, and Fly Brushes in the Antebellum South” in Buildings & Landscapes: Journal of the Vernacular Architecture Forum. Spring 2016  p. 29-51