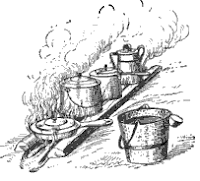 Stew stoves - one of my favorite flue-zies - were described in a 1882 camping book. The image shows two green logs flattened along the top to securely place the pots and pans over coals from the main fire.  Another camping book had illustrations of different pots and pans used to make ovens.


from  Practical Hints on Camping
"The French cook marvelous dinners over two or three little square holes, filled with burning charcoal, and this has suggested the following method, which experience has proved at times to be most excellent. Have the main fire in a good state, but not too large. Take from it a few live coals, and build three small fires near by, and close to each other. The main part of your dinner is prepared over these small fires. They are more easily kept at a uniform heat; you are much freer from heat and smoke; there is not as much danger of upsetting, and each dish having a distinct fire by itself, there is less confusion. This method will be found not only more convenient, but also has the advantage of cooking a greater number of dishes at the same time, and with little trouble.

T. S. Updegraff suggests a fire-place made as follows: "Pile up a lot of stones, about a foot high and four feet long. Build a wing on each end two feet long. Cover the stones with sod and earth. Now place bars of iron across the top of this upon which to set your cooking utensils."
Henderson, Howard. Practical Hints on Camping.  Chicago: 1882

"Select two medium thick green logs and level off with the camp axe the top as shown in the engraving. Set and brace these logs a few inches apart, only so as they will form support on which the bottom of your utensil will rest safely; scrape out a little trench underneath and with a few pieces more form the windguard or radiator shown in illustration and, lo! your splendid camp range is complete. Don't think you must have a range or stove to have a good oven. As good an oven as can be built is made by the simple plan of taking two sufficiently large plates—common baking pans or stew kettles; one a trifle larger than the other, so as to be inverted over each other easily; fit them first so as to be sure of the right ones.

Into the smaller set your bread, biscuits, meats, game, fish or whatever you desire to bake or roast; now make near your camp fire a flat, good thick bed of coals (embers from the fire), on it place your pan or kettle containing the food, with the large one inverted over it. Strew more live coals on its top and you have a most excellent oven—one that needs no attention except when roasting meats and then only to renew the fire coals when burnt out or needed; otherwise it need not be touched until it is done; ready to serve. If roasting, basting is unnecessary. Allow fifteen minutes for biscuits; bread, fifteen to twenty minutes; meats, one to two hours according to size; beans, three to six hours, if possible.

An Oven from two round camp stew kettles 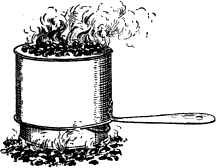 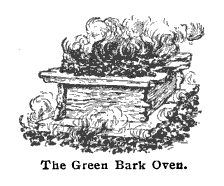 Use the green, thick bark of a tree, rough side down on fire. Use the camp fire tongs (as illustrated elsewhere) or make a toaster and broiler as shown, from a stick having a split end which will hold the meat over a hot coal fire."

Congratulations to the Sierra Club for 125 years of protecting our outdoors!