The sticks in the photo-shoot have prongs like a fork at the top. Most folks simply made them by whittling with a knife to make a pointed end on a green twig.  All the marshmallows that day were cooked over a gas stove - horrors!! - but still tasted good. (I'm on the right). However after eating so many in one day for the photos, I almost said never more.

Haven't tried them, but there are gadgets available to make them in the microwave. 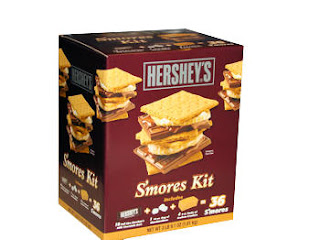 Now-a-days you can buy a box of the fixin's and even a box of sticks.  Last year I tried some with some folks who got the boxes.  I thought that the current grahams were too thick and overpowered the marshmallows. (ah, memories are always better!) But the toasting was still fun - everyone seems to have their own technique over the fire to get 'golden' rather than black/burned marshmallows.

1927  Tramping and Trailing with the Girl Scouts

1946  Rural Recreation
S'Mores. Marshmallows — Milk chocolate bars — Graham or soda crackers. Toast a marshmallow until it looks like a golden puff ball (patience is a necessary ingredient), and put it on a cracker. Cover it with a half of a chocolate bar, add a top cracker and squeeze gently.  You can’t resist it if you have a sweet tooth.