"Coming down a little into the century [1800s], we learn from a Devonshire newspaper, that, at Paignton Fair, near Exeter, a plum-pudding of vast dimensions was drawn through the town amid great rejoicings. No wonder that a brewer's copper was needed for the boiling; seeing that the pudding contained four hundred pounds of flour, a hundred and seventy pounds of beef suet, a hundred and forty pounds of raisins, and two hundred and forty eggs. This eight hundred pounder, or so, required continuous boiling from Saturday morning till the following Tuesday evening. It was finally placed on a car decorated with ribbons and evergreens, drawn through the streets by eight oxen, cut up, and distributed to the poor.

At Bartholomew Fair, some years later, there was a plum-pudding seller who was quite a character in his way; neatly dressed, his hair powdered and tied a la queue, and without a hat, he carried his delicacy on a board, announcing its merits in a full and ringing voice, letting off verbal squibs of wit and humour, and selling his plum pudding at a penny a slice.
Plum-pudding never has really taken root (so to speak) in any part of Europe save England."
All the Year Round: A Weekly Journal, By Charles Dickens Dec 23, 1876 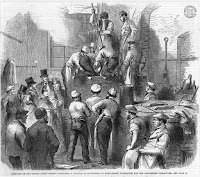 Enormous Pudding.
"Lately at Paignton Fair, near Torbay, a plum-pudding, of an extraordinary size, was prepared and placed on a car, fancifully decked with ribbands, laurel, &c. and drawn through the town by eight oxen; it was then cut up, and distributed among the populace, conformably to an ancient custom, neglected many years, but thus pleasantly revived. An immense concourse from the neighbouring parishes assembled to witness the ceremony, and enjoy the amusements of the fair.

The ingredients which composed this massy pudding were 400 lb. of flour, 170 lb. of beef suet, 140 lb. of raisins, and 20 doz. [240] of eggs: it had been kept constantly boiling in a brewer's furnace [copper], from Saturday morning until Tuesday morning; tin pipes were passed through it to convey the heat, so that the middle and every part should be thoroughly dressed.
The Literary Panorama, 1819.  [from a June 7, 1809 Devonshire newspaper]
Image 1: Dictionary of Arts and Science, 1756
Image 2: Illustrated London News.  Jan 1, 1863. A 900 lb pudding – 10 feet in circumference - made in the kitchen of Marylebone Workhouse.