Pumpkin waffles made with yeast 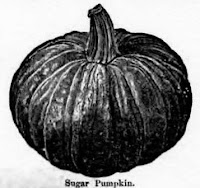 ... then dipped in melted butter and rolled in cinnamon sugar.  Once again it is time to dig into my hundreds of old recipes on pumpkins. For the past few years I've tried this 'newer' 1906 recipe, and not been successful so far. Does any one have ideas on historic pumpkin waffles with yeast? or without?

Take one cup of mashed and seasoned pumpkin, carefully drained, and add one well beaten egg, one cup of warm cream, half a yeast cake dissolved in half a cup of lukewarm water, one tablespoon of melted butter and four cups of sifted flour; thin to a rather thick batter with sweet milk; allow it to rise until light and then beat down, adding a pinch of powdered mace and ground ginger; again let it rise for twenty minutes and bake in heated waffle irons to a golden brown; dip the waffles while hot in melted butter and roll in equal parts of cinnamon and pulverized sugar.
Maddocks, Mildred.  Good Housekeeping Family Cook Book 1906