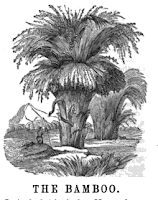 In 1756 Mrs. Bradley included a recipe to imitate pickled bamboo using the tender spring shoots of the elder tree with wine and beer vinegar in her The British Housewife.  Pickled bamboo had the "appearance [of] pickled yellow cucumbers cut in long slices."

There is a fine and much esteemed foreign Pickle, which is made of the tender Shoots of the Bamboo Cane, and in England an Imitation if it may be made with young Shoots of Elder.  They are as Tender, and by that Time they have been four or five Months Pickles, are very little different in Taste.  They are to be done thus.

Cut some of the fine young Shoots of Elder, that appear toward the end of May.

Mix up a strong Brine of Salt and Water, and set it by you in a Pan.  Cut the Shoots into Lengths, and Peel them carefully; as they are peeled, throw them into the Water, and let them lie there four and twenty Hours.

Then take them out, wipe them with a Napkin, and lay them to be perfectly dry on the outside.
While they are drying, prepare the Pickle thus.  Mix together equal Parts of White Wine and Beer Vinegar; and to two Quarts of this, put two Ounces of white Pepper, two Ounces of Guinea Pepper, and three Ounces of sliced Ginger; half an Ounce of Mace, and the same Quantity of All-Spice.

Set all upon the Fire, place the Shoots regularly in a large Jar, and when the Pickle boils, pour it upon them.

Stop the Jar with a Bong, and set it before the Fire to keep it hot, for two or three Hours, often turning it about, that it may every where heat equally.  Then set them away to cool, and tie the Jar over for keeping.
Mrs. Martha Bradley.  The British Housewife.  London: 1756

Bamboo pickle, in imitation of the Indian, for eating with cold meat, is made in spring by peeling off the outer skin of the shoots of the common elder, soaking them for twelve hours in salt and water, boiling them in vinegar for a minute, placing them in a jar, in layers, with a little allspice, ginger, and mace, all unbruised, strewed between the layers, and then pouring in the vinegar boiling hot. Let the jar stand near the fire for two hours, and then, when cold, cover the mouth of the jar closely.
The Household Encyclopædia; or, Family dictionary...  London: 1858

Achia, or Achiar.  Pickled bamboo. The young and tender stalks of the bamboo are cut into short lengths; these are split into slices, and then pickled in vinegar with pepper and other spices ; afterwards, being packed in earthen jars, they are sent to Europe.  It is of a pale-yellow colour, and resembles in appearance pickled yellow cucumbers cut in long slices.  The principal consumption is in Holland.
A popular technical dictionary of commercial and general information.  1885