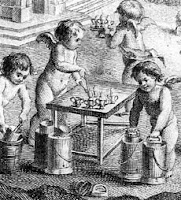 The first Earl of Sandwich kept a private journal which gave a recipe for a container of chocolatti placed into a bowl with snow to freeze. The early drink was made with water, thus when frozen, was more like a sherbet.  Later chocolate ice creams used cream or a cooked custard of eggs and cream.

After a couple years as ambassador to Portugal, then Spain, Edward Mountagu the First Earl of Sandwich  (1625-1672) devoted 30 pages of his private journal to chocolate.  Spain had brought chocolate from its colonies since the discovery, but it (and coffee and tea) were just being sold in coffee and chocolate houses in the UK.

Dr. Loveman's excellent article (listed below) contains the recipe and a sketch of a cacao grinder sent by John Werden who stayed in Madrid researching the process and expense of making chocolate.  The Earl had written down other recipes and techniques in his journal.

“Prepare the chocolatti [to make a drink]… and Then Putt the vessell that hath the Chocolatti in it, into a Jaraffa [i.e. a carafe] of snow stirred together with some salt, & shaike the snow together sometyme & it will putt the Chocolatti into tender Curdled Ice & soe eate it with spoons.”  [Loveman]

Off topic but clever for those of us who have sat through meetings... from his published journal -
"On Monday morning we met... by 7 oclock and there we debated the matter [victuals] again and the same things over and over... And having tired ourselves sufficiently Mr Sterry the Secretary was called in..."

The 4th Earl of Sandwich, during the 18th century, is the one attributed to the sandwich.

She labeled herself as confectioner to Queen Anne, and is noted for having the first recipe for "ice cream" in a book in 1718.  A later edition of her Receipts includes -

TAKE a Quarter of a Pound of Chocolate, breaking it into a Quarter of a Pint of boiling Water j mill it and boil it, 'till all the Chocolate is dissolv'd; then put to it a Pint of Cream and two Eggs well-beaten; let it boil, milling it all the while; when it is cold, mill it again, that it may go up with a Froth.

To make Ice cream
TAKE Tin Ice-Pots, fill them with any Sort of Cream you like, either plain or sweeten'd, or Fruit in it; shut your Pots very close; to six Pots you must allow eighteen or twenty Pound of Ice, breaking the Ice very small; there will be some great Pieces, which lay at the Bottom and Top: You must have a Pail, and lay some Straw at the Bottom; then lay in your Ice, and put in amongst it a Pound of Bay-Salt; set in your Pots of Cream, and lay Ice and Salt between every Pot, that they may not touch; but the Ice must lie round them on every Side; lay a good deal of Ice on the Top, cover the Pail with Straw, set it in a Cellar where no Sun or Light comes, it will be froze in four Hours, but it may stand longer; than take it out just as you use it; hold it in your Hand and it will flip out. … 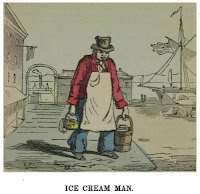 "Philadelphia has for a long time enjoyed a pre-eminent reputation in the manufacture of these delicious compounds" Parkinson wrote and stressed using only excellent cream.  She had recipes for cream, and also for custard ices which used a cooked base of cream and eggs.


Chocolate Ice. --One quart of cream, six ounces of chocolate, and ten ounces of sugar; dissolve the chocolate in a little water, or make the sugar into a syrup, and dissolve it by putting it on the side of the stove, or over the fire; add the cream and eggs, and make it into a custard as before; when cold, freeze.

Custard for Ices. --One quart of cream, six eggs, and twelve ounces of powdered loaf sugar; break the eggs into a stew-pan, and whisk them together; add the cream and sugar; when well mixed, place it on the fire, and continue stirring it from the bottom with the whisk, to prevent burning; until it gets thick; take it from the fire, continue to stir it for a few minutes, and pass it through a sieve. If the custard be suffered to boil, it will curdle. … These are similarly composed to the cream ices, with the addition of six eggs to each quart of cream.


Sources
The Journal of Edward Mountagu: First Earl of Sandwich, Admiral and General at Sea... London: 1929   only parts of his journal are included in this book.  Chocolate was not included for some inexplicable (to a foodie) reason.
Loveman, Kate. "The Introduction of Chocolate into England: Retailers, Researchers, and Consumers, 1640–1730," Journal of Social History, Fall 2013. p.27-46
Mrs. Mary Eales’s Receipts. Confectioner to her late Majesty Queen Anne.  London: 1733 (first ed. 1718)
Parkinson, Eleanor.  The Complete Confectioner…  Philadelphia: 1864ed