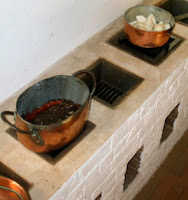 Surviving stew stoves (stewing stoves, masonry stoves) vary in size, shape and how they were heated.  Jefferson sketched a plan for his kitchen in 1796 with a long range of 8 stew-holes.  Thirteen years later he ordered 8 grills [grates] with "box-part" [cheeks] from Henry Foxall - then took two years to pay for them.

Not every hole on the front side of a stew stove is a fire box.  Usually I don't post much on my "flue-zies" research but a recent speaker to a culinary historian's group gave some of the same ole wrong information about the reproduction stew stove at Monticello.  The correspondence between Jefferson and Foxall still exists about the iron work, which is great, so in this post I want to include their letters, below, and discuss how the grates and cheeks were really used/heated. 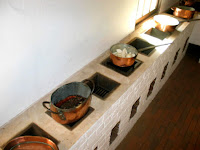 Charcoal was placed on the grate or "grills" contained by the iron cheeks or "box-part" thus forming a box or semi-enclosed container for the fire to be near the pots/pans on trivets.  The cheeks and grate can be seen in the first, closeup of the photo taken by Justin Sarafin, from the Monticello website. The ashes fall between the bars into the ash hole below.  The open brick hole beneath each stew hole is not a fire box.  Some stew stoves do have fireboxes. Some have a common ash dump under a couple holes; the most I've seen is a stew stove with one ash dump/arch for five stew holes (not open to the public).

Henry Foxall (1758-1823) from Georgetown did the iron work for the White House stewstove, according to the chef.  Jefferson requested 8 grates - 2 large, 3 medium and 3 small - combined with the "box-part."  However, Foxall made them separate and included 2 grates per hole, since he said "it might be difficult for you to obtain others when the first set of Grates might become useless."  An original grate was found at Jefferson's Poplar Forest; from article about their new old kitchen HERE

Letters with Foxall about "stoves or stew-holes"

Monticello Mar. 24. [18]09.
Sir
The cook which I had in Washington (mr Julien) [Honore Julien 1760-1830] and who is now with me for a time, informs me you made for the President’s [White House] kitchen some irons of casting for the stoves or stew-holes in the kitchen, in which the box-part & the grille1 or bars were all solid together, and that you made them of three sizes. I must ask the favor of you to make 8. for me, to wit, 2. of the largest size & 3 of the middle & 3 of the smallest size, and forward them for me to Richmond to the care of Messrs Gibson & Jefferson, forwarding me the bill at the same time. I must pray you to do it without delay, if convenient, as they are indispensable in a kitchen. Accept the assurances of my esteem & respect
Th: Jefferson

Your favor of the 24th Ulto came to hand in due course, The Stew holes you request me to Send You, I have Made and put them on board a vessele bound for Richmond which is to sail this day

I observe the Information you have received respecting our Method of Makeing the Stew holes is not agreeable to our practice, we cast the Cheeks, and grates, sepperate and not Solid or together, the reason is that one set of Cheeks will Last as long as Many sets of grates—

I have Sent you a duble set of grates two to Each Stew hole, believeing it might be difficult for you to obtain others when the first set of Grates might become useless—

I have not given up the Intention of Executing the Stove you were so kind as to send me the Model of—when done I will inform you of its success, Should it answer the Expectation I have of it I will Send you one on agreeable to your request

Dear Sir
I have long waited & waited in the expectation that I might have occasion to make some larger remittance to Washington in which the 13.40 D due you might be included, as being a fractional sum. but finding none such arrive, I have concluded to remit it in our bank bills. I accordingly inclose 25 D. of which 12. are due to Conrad & co. booksellers on the Capitol hill, which I must pray you to pay to them. the denominations of our bills did not permit me to make either remittance separately. as the 40. Cents can only be sent in silver, I shall not put it into this letter that it may not excite suspicions, but will put it under separate cover by another post. Accept the assurance of my continued esteem & respect.
Th: Jefferson

An article I wrote about stew stoves at Hampton (completed in 1790) in Maryland -  “A Federal-era Kitchen: Hampton’s Stew Stove, Iron Oven, and Hearth” in Food and Material Culture : proceedings of the Oxford Symposium on Food and Cookery 2013  p248-255. HERE