They came, they ate, they burned the house down - the British burning the White House in 1814

On August 24, 1814, food was prepared for a 3:00 dinner for forty.  There were cut glass decanters of ale, cider and wine placed in coolers, plate warmers by the fire and a variety of meats on the spits.  The British troops sat down to a fine repast... then immediately set fire to the President's House.  A nice thank you for the meal.

After their victory at Bladensburg, just north of Washington City, the British marched into the city about 7:30 pm.  They burned the Capitol building first, then Major General Ross and Admiral Cochrane with 100 troops entered the 'President's House.'  Later, a few iron pots and pans were found in the rubble. 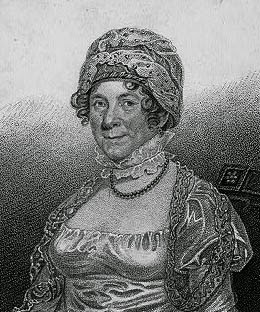 
“Mrs. Madison ordered dinner to be ready at 3, as usual; I set the table myself, and brought up the ale, cider, and wine, and placed them in the coolers, as all the Cabinet and several military gentlemen and strangers were expected.”  At three word came to leave immediately since the British were expected shortly.  “When the British did arrive, they ate up the very dinner, and drank the wines, that I had prepared for the President's party.”

Jennings also recounted that Mrs. Madison had already left, with some dining room silver, when the portrait of Washington was removed by “...John Suse (a Frenchman, then door-keeper, and still living) [Jean Pierre Sioussat (Paris 1781-1864 DC) first hired by Jefferson in 1801, and [Thomas] Magraw, the President's gardener, took it down and sent it off on a wagon, with some large silver urns and such other valuables as could be hastily got hold of.”
Note: Jennings said Sioussat and Magraw removed the painting, not himself, which is the current popular story.
Jennings, Paul.  A Colored Man's Reminiscences of James Madison.  NY: 1865

“When our people entered Washington, the first house of consequence which they went into was that belonging to Madison, the table of which they found laid out with a good repast, and decorated with several decanters containing wine, etc. It is said that one of the soldiers tied up the plates and knives and forks in the table cloth, and brought them away. The house was immediately set fire to.”
Urquhart, Lieutenant Beauchamp Colclough. London Curoier, October 13, 1814.

“We entered Washington for the barbarous purpose of destroying the city. Admiral Cockburn would have burnt the whole, but Ross would only consent to the burning of the public buildings. I had no objection to burn arsenals, dockyards, frigates building, stores, barracks, etc., but well do I recollect that, fresh from the Duke’s [Wellington] humane warfare in the South of France, we horrified at the order to burn the elegant Houses of Parliament [the Capitol] and the President’s house. In the latter, however, we found a supper all ready, which was sufficiently cooked without more fire, and which many of us speedily consumed, unaided by the fiery elements and drank some very good wine also..”
Moore, G.C. Smith, ed. The Autobiography of Sir Harry Smith. London: Wakelyn, 1901.

The most searing account appeared in 1826 and copied in later books:

"Whether the sight of his enemies cooled his courage or not, I cannot say, but, according to my informer, no sooner was the glittering of our arms discernible, than he [President Madison] began to discover that his presence was more wanted in the senate than with the army [at Bladensburg]; and having ridden through the ranks, and exhorted every man to do his duty, he hurried back to his own house [the President's House], that he might prepare a feast for the entertainment of his officers, when they should return victorious.  For the truth of these details, I will not be answerable; but this much I know, that the

feast was actually prepared, though, instead of being devoured by American officers, it went to satisfy the less delicate appetites of a party of English soldiers. When the detachment, sent out to destroy Mr. Maddison's house, entered his dining parlour, they found a dinner table spread, and covers laid for forty guests. Several kinds of wine, in handsome cut-glass decanters, were cooling on the side-board; plate-holders stood by the fire-place, filled with dishes and plates; knives, forks and spoons, were arranged for immediate use; in short, every thing was ready for the entertainment of a ceremonious party. Such were the arrangements in the dining-room, whilst in the

kitchen were others answerable to them in every respect. Spits, loaded with joints of various sorts, turned before the fire; pots, saucepans, and other culinary utensils, stood upon the grate; and all the other requisites for an elegant and substantial repast, were exactly in a state which indicated that they had been lately and precipitately abandoned.

You will readily imagine, that these preparations were beheld, by a party of hungry soldiers, with no indifferent eye. An elegant dinner, even though considerably over-dressed, was a luxury to which few of them, at least for some time back, had been accustomed; and which, after the dangers and fatigues of the day, appeared peculiarly inviting. They sat down to it, therefore, not indeed in the most orderly manner, but with countenances which would not have disgraced a party of aldermen at a civic feast; and having satisfied their appetites with fewer complaints than would have probably escaped their rival gourmands, and partaken pretty freely of the wines, they finished by setting fire to the house which had so liberally entertained them.
Gleig, George Robert.  A Narration of the Campaigns of the British Army at Washington and New Orleans.  London:  1826