The most striking images of a Papal Conclave - at least for food historians - are found in The Opera of Bartolomeo Scappi, 1570.  Close-ups of the hamper, credenza tub, carafe container and the 'ruota' dumbwaiter door.

Following the death of Pope Paul III in 1549, a conclave was called which lasted two months, ending in February 1550 when Pope Julius III was elected.  Scappi described the routine to feed the Cardinals who were locked in the Chapel.  The food was prepared in the kitchen and transported by stewards and the personal staff of each Cardinal.

At night, the order of service was chosen by lot, with the ill Cardinals served first.  A messenger would call the staff of the next name on the list.  Each group brought a hamper containing the food cooked in the kitchen, a tub for the cold credenza food (painted with the Cardinal’s coat of arms on the side) and a container holding carafes of wine and water.

All the food and containers were inspected, then the food was passed through the Ruota del Conclave – a revolving dumbwaiter door.  Click to enlarge the images. 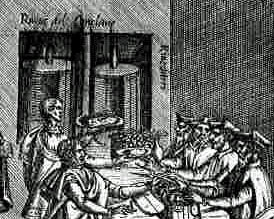 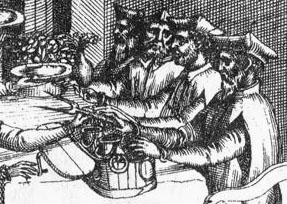 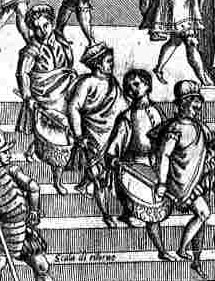 Several close up views of the hamper: 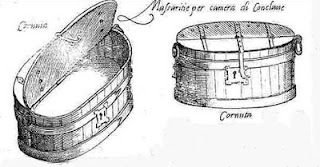 The holder of carafes for wine and water: 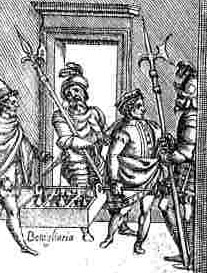 The staffs or poles:

The pictures are in the Opera di M. Bartolomeo Scappi... Venetia: 1570, from the Biblioteca de la Universidad Complutense de Madrid

Partial view of the English translation by Terence Scully  HERE