The tiny purple shells of the Cochineal (found on cactus - see last section of this post) was used as a dye.  The scale insects were generally dried in the sun or oven.  In food, it's pink/red/purple color enhanced jelly, marmalade, blanc mange as well as pickled Eggs, "Golden Pippins to look like Apricots," collared Beef,  icing (as described on the Christmas or Black Cake HERE ) and other foods.

To use it, the shells were ground fine then steeped in brandy or boiled.  It was then strained "through a fine sieve" or cloth; or boiled while tied in a cloth (muslin, "linen-rag").


Preparing a decoction by boiling in water:


…prepared Cochineal, or such as has been boiled in Water with Allom and Cream of Tartar, and then all may be strain’d, to be used…  [Chomel, Noel and Richard Bradley.  Dictionaire Oeconomique: or, The Family Dictionary. London: 1725]


To preserve Cochineal.   TAKE one ounce of cochineal, and beat it to a fine powder; then boil it in three quarters of a pint of water, till half is consumed; then beat half an ounce of roach-alum, and the same quantity of cream of tartar very fine, put them to the cochineal ; boil them all together a little while, and strain it through a fine sieve; put it into a phial and keep it for use.  If it is not to be used immediately, boil an ounce of loafsugar with it, and it will prevent its moulding.  [Mason, Charlotte.  The Lady's Assistant.  London: 1777]


A second way to prepare the cochineal was to steep it in brandy:


Take Two-penny worth of Cochineal, bruise it with the Blade of a Knife, and put it into half a Tea Cupful of best French Brandy, and let it stand a quarter of an Hour, and filter it thro' a fine Cloth, and put in as much as will make the Jelly or Flummery a fine pink…  [Raffald, Elizabeth. The Experienced English House-keeper: For the Use and Ease of Ladies, House ... Manchester: 1769]

The cochineal could be rubbed directly on the apples [pippins] or beef:


To stew Golden Pippins to look like Apricots…. when they are half done, tie up some cochineal bruised in a rag, and touch one side of each pippin, to make it look like the red side of an apricot…  [Mason, Charlotte.  The Lady's Assistant.  London: 1777]


To collar Beef. TAKE a thin flank of Beef, take off the skin, beat it, and rub it over with a little cochineal, half a pound of brown sugar, one ounce of salt-petre beat fine, and five ounces of common salt, rub it well in, and let it lie ten days… [Mason, Charlotte.  The Lady's Assistant.  London: 1777]


The crushed cochineal tied in a piece of small cloth and placed in the boiling water or pickling solution:


A Compote of Pears. TAKE a dozen pears, coddle them; when they are soft, take them out and put them into cold water; pare, cut them in half, and take out the core; put them into a syrup made of loaf-sugar; to every pound of sugar, a pint of water; cover them close in a preserving-pan, and boil them quick with a little cochineal powdered and tied up in a linen-rag …   [Mason, Charlotte.  The Lady's Assistant.  London: 1777]


To pickle Eggs.   BOIL the eggs very hard ; peel them, and put them into cold water, shifting them till they are cold. Make a pickle of white-wine vinegar, a blade of mace, a bunch of sweet herbs, and a little whole pepper; take the eggs out of the water, and put them immediately into the pickle, which must be hot; stir them a good while, that they may look all alike; untie the herbs, and spread them over the top of the pot, but cover them with nothing else till they are turned brown: they will be fit to eat in nine or ten days.  Bruise some cochineal; tie it up in a rag; dip it in the vinegar, and squeeze it gently over the egg, and then let the rag lie in the pickle. This is a great addition.  [Mason, Charlotte.  The Lady's Assistant.  London: 1777]


To pot Beef.  … Season them with salt and pepper, and a little cochineal.  [Farley, John.  The London Art of Cookery, and Housekeeper's Complete Assistant:.  London: 1800]
The cactus and the bug - 1853

Cochineal insects are natives of Mexico, where they were raised by the Mexican Indians, long before the country was discovered by the Spaniards. Cochineal is now cultivated in some of the West India Islands, and in Georgia and South Carolina; but it is in Mexico…most extensively cultivated at Oaxaca. This insect is reared on the Indian figtree, or nopal, which is a species of cactus. [Prickly Pear] 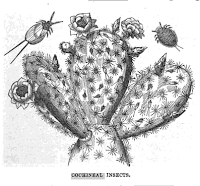 The male insect, on the left, and the female, on the right, are magnified. It is the female insect that is so much prized for the beauty of its color. A small quantity of the insects is sufficient for each plant, when it is inoculated. As the leaves increase, the whole plant is sure to be covered with the cochineal, when the insects are scraped off with great care.


The natives… raise plantations of the nopal near their dwellings. It grows freely from cuttings, and these are fit to receive the insect after eighteen months. Into a small nest, formed of some thread-like substance, or cottony matter, a few females are placed, about the middle of October. These nests are affixed to the nopal, on the side facing the rising sun. The eggs are soon laid and hatched; and as each female produces upwards of a thousand eggs, a large colony of these little creatures soon spread over the tree. It is said that six generations of them are produced in a single year…

The cochineal is first collected about the middle of December. The insects are removed from the nopal with a knife, the edge of which has been blunted, or are carefully brushed off. This labor is performed by the Indian women, who often sit for hours together by the side of a single plant.


The insects are usually killed by the application of heat; sometimes by baking them in ovens. When the cochineal arrives in market, it is in the form of small grain, having a convex and a concave side, but with very little resemblance to the body of an insect.    [Woodworth, Francis.  Wonders of the Insect World: With Illustrative Engravings.  NY: 1853]
“The Nopal plant that is grown in America and produces seed,” in Reports on the History, Organization, and Status of various Catholic dioceses of New Spain and Peru, 1620-1649.  Newberry Library: Vault Ayer MS 1106

Photo of the purplish shells with three pepper corns on bottom left corner for size comparison.