Emma Darwin kept a small handwritten recipe book, and about fifty of her recipes with modern interpretations are in Mrs. Charles Darwin's Recipe Book which also contains a lengthy information section.   Several of the recipes had differences from others in contemporary cookbooks, such as almonds replacing chestnuts in the Nesselrode ice cream...
In addition to Victorian dishes such as Nesselrode Pudding, Burnt Rice and a chocolate blancmange using the newly available powdered gelatin, there are many dishes from the Georgian/Regency periods including Beef Collops, Pea Soop and Ragoos/ragout of mutton.

"Mrs. Charles Darwin's Recipe Book" was written on the cover label of her eight by four inch book and within she wrote "Emma Darwin May 16th  1839."  So...she started writing it just months after her wedding.
When Charles Darwin (1809-1882) married Emma Wedgwood (1808-1896) on Jan. 29, 1839, he had completed years of study on the HMS Beagle and would write many works, including On the Origin of the Species, in 1859.  Their shared grandfather, Josiah Wedgwood, produced the renowned Wedgwood pottery and china items, amassing a large fortune.  Emma was talented, spoke four languages, travelled to Europe, studied piano with Chopin; and when married took care of her husband during his illnesses and had ten children.  Down House, in the Kent countryside near London would be their home after spending their first few years in the city.

This exquisitely illustrated book combines history and recipes.  In addition to their modern interpretations of the recipes,  there are images of each of Emma's written recipes so the reader can prepare the dish directly from her handwritten instructions or from the modern suggestions.  The cook book is scattered with botanical pictures and photographs of some of the completed dishes.  The first forty pages are filled with details about the Darwins, the recipe book and some history of the period.

The Burnt's.  The first recipes that attracted me to the book, and the first I made, were Burnt Rice and Burnt Cream.  How could I resist, since last year I wrote about Mary Randolph's Burnt Custard (1824, with a picture of a salamander) HERE. Just like the Burnt Custard and Creme Brule, the rice pudding and the custard (Cream) are cooked, then topped with sugar which is heated by an iron salamander or shovel.

Once again Emma copied down a recipe with a different feature - brown sugar, instead of white, was to be spread over the Cream and caramelized.  It results in a crunchy crust of brown sugar on the custard and it was much easier to heat up than white sugar under a salamander.

For the modern kitchen lacking a salamander, the authors suggest using the oven broiler, blow torch or heating the sugar in a separate pan, then pouring it over the top of the rice pudding.  The last method is described in a period recipe from Dalgairns in 1830: "Boil with a little water some pounded loaf sugar, till it turn brown, but do not stir it till taken off the fire; by degrees pour it in Figures over the top of the [Burnt] cream.  It may be eaten hot or cold."

Chocolate.  There is one recipe in her cookbook for chocolate - a  'Chocolate Cream' or blancmange made with powdered gelatin.  The gelatin, grated chocolate and milk were heated in a double boiler - a jug set in a saucepan of water over the fire.  This Chocolate Cream is not your mother's jelly mold, but a thick creamy dessert - a mix of custard and jelly.

Before powdered gelatin, in the late 1830s, jellied dishes required boiling of calves/pigs feet (messy, smelly), isinglass (from fish, also smelly), and hartshorn (the ammonia smell can - did for me - cause headaches).

Nesselrode Pudding was an ice cream loaded with candied fruits, like a frozen fruit cake or... the tutti frutti ice cream of the 1960s.  It can be very complicated, as seen in examples HERE.  Emma's version varies from those by using pounded almonds or almond flour instead of the typical chestnuts; with brandy, cream, milk and egg yolks in a basket mold.  The popular ice cream started appearing in the 1830s and was named for a Russian diplomat.

Vegetables, meat, fish, cheese, macaroni and other dishes, sweet and savory, are included.  The Potatoe Rissoles are mashed potatoes encasing rolled (like "Veal Olives") beef or ham slices.  Other rissole recipes of the time used minced meat.  Each of the above recipes turned out quite delicious.  There are several more dishes I am getting ready to try.  For those not acquainted with 18th and 19th century recipe names, don't be put off by Scotch Woodcock - a cream sauce with anchovies on toast, not a bird.

And now to the RICE.  Amid all his journal and book writing, Charles Darwin found time to write down the recipe "To Boil Rice" in Emma's book.  What a nice husband.  He included the precise instruction to boil the rice and water "...twelve minutes by the watch..." and the minutes necessary to set the drained rice over the coals.  An image of his written recipe is included in the lengthy historical introduction. 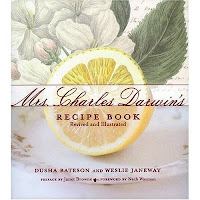 Dusha Bateson and Weslie Janeway have a lyrical way of writing the background and instructions for each recipe, with such phrases as "wonderful piquancy," "Burnt Rice is rice pudding with pretensions," and the "salad is a simple modern dish - perhaps 'timeless' is a better way of describing it."  They discuss some problems they encountered in converting the recipes into modern interpretations.  As a hearth cook who works on old recipes so often, it was interesting to read their thought processes from their modern perspective, and puzzle over implements I use often (type of oven, salamanders, broilers/gridirons).  Most importantly, they have brought Mrs. Darwin forward on her own, and her excellent choices of recipes.

Mrs. Charles Darwin's Recipe Book, Revived and Illustrated, by Dusha Bateson and Weslie Janeway.  NY: Glitterati, 2008.
All the photographs are from the book.